Dustin Pedroia will be honored Friday night at Fenway Park before the Boston Red Sox take on the New York Yankees.

The former second baseman retired in February after a storied career, and his importance to the Red Sox organization never went unnoticed.

A four-time Gold Glove winner, 2007 Rookie of the Year, 2008 MVP and three-time World Series champion, Pedroia embodied what it meant to put on a Red Sox uniform.

“What this kid means to the organization, to this city, for me personally, you can’t put it into words,” manager Alex Cora told reporters Friday over Zoom. “From day one he gave it everything he had to the game, to the Red Sox. He didn’t take a play off in his career. Even when he didn’t play, he was locked in on every pitch. He’s amazing.”

Pedroia, quite literally, played until his body said no more. He went through several surgeries and setbacks after his 2017 knee injury, and didn’t call it quits until he was forced to.

He remained around the team even when he wasn’t playing, but Cora is happy his former teammate gets to be an MVP off the field and spend more time with his family.

“One thing I’m very proud of is not just what he accomplished on the field. He and (wife) Kelli have been amazing with those boys,” Cora said. “They’ve been MVP parents. That’s something I always talk to him about — how he takes care of his family and the way he treats people too. It should be a great Friday night here at Fenway Park.” 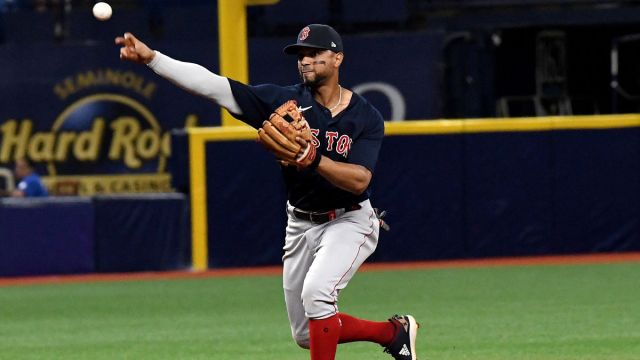