Patriots Took Care Of Business In Atlanta, But Now Their Real Test Begins Skip to content

The local and national narratives surrounding the Patriots have dramatically changed over the last month. Many now consider New England a legitimate contender in the AFC, capable of reaching Super Bowl LVI in Los Angeles.

Is that a fair assessment? We’re about to find out.

The 7-4 Patirots have won five games in a row and now sit in fifth place in the AFC Standings. Their odds of making the playoffs have skyrocketed from 21 percent after their Oct. 17 loss to the Dallas Cowboys to 83% following Thursday night’s 25-0 win over the Atlanta Faclons, per FiveThirtyEight. With Mac Jones and the offense rounding into form, the defense ascending to elite status and the coaches finding their grooves, the Patriots look like an approximation of the franchise New Englanders are used to seeing.

But let’s not get too carried away over the results of the last five games.

New England’s victories have come against opponents with a combined record of 21-27. The wins over the Los Angeles Chargers and Cleveland Browns were legitimate, but the Falcons, New York Jets and Carolina Panthers were, in retrospect, inferior opponents whom the Patriots should’ve beaten. Atlanta didn’t belong on the same field with Bill Belichick’s team Thursday night.

That’s not to say the Patriots weren’t impressive in those victories. They were, especially the defense, which has been on a tear since the Cowboys loss. But context, such as quality of opponent and absences of star players, matters. New England has taken care of business, as good teams should do.

The Patriots will look to make it six wins in a row when they host the Tennessee Titans, currently first in the AFC, on Nov. 28 in a showdown at Gillette Stadium. The Titans will be without both Derrick Henry and Julio Jones — significant losses, to be sure — but Tennessee, with Mike Vrabel in charge, is a quality opponent that will show up ready to play. The Patriots will need to play their best game of the season.

After that, New England will face the Bills in Buffalo on a Monday night, when first place in the AFC East could be on the line. The Bills are far more flawed than many expected them to be before the start of the season, but the Josh Allen-led offense is explosive and the defense is tough. Plus, the environment is not an easy one to play in. We’ll see what Jones is made of.

The Patriots then will go on a bye before facing the talented-but-inconsistent Colts in Indianapolis and rounding out their four-game gauntlet with a home game against the Bills. By the end of that matchup, we’ll know just how good the Patriots are, regardless of what the standings look like.

Expectations for the Patriots should be adjusted — they’ve earned it. But the true ceiling of a team only five weeks removed from potential disaster remains to be seen. Thankfully, most lingering questions will be answered in the near future. 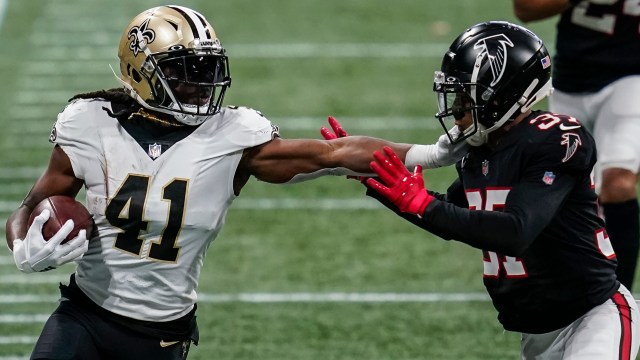 Saints RB Alvin Kamara Did Not Practice On Friday