Nick Foligno finally got on the scoresheet for the Bruins when he potted his first goal of the season in the third period of Boston’s eventual 4-3 overtime win against the Buffalo Sabres at TD Garden on Saturday afternoon.

Two minutes later, Taylor Hall scored the game-tying goal to force overtime before Charlie Coyle got the Bruins back in the win column just 34 seconds into OT.

Foligno hasn’t exactly lit it up in terms of stats for the Bruins, which could look disappointing from the outside looking in considering the NHL veteran and former Columbus Blue Jackets captain was brought in to provide some much-needed secondary scoring.

When looking at the numbers, Foligno certainly hasn’t provided the boost to the secondary scoring many thought he would. But he made his presence known on the bench Saturday as he provided more than just a goal.

“I think he knows what his game looks like when it’s going well. That’s the physicality, that’s the net-front presence,” head coach Bruce Cassidy said over Zoom after the game. “He certainly has the ability to make some plays, but, some of that with the pace of the game you leave to your younger years and you take the other things that you can bring every night. Good for Nick.

“I’ll tell you what else I liked about him, he was vocal on the bench when we were behind. Good, positive influence. So some of those intangibles, we talk how you might not see on the scoresheet or on the television or if you’re in the building. They help you sort of settle in and get your focus back. A lot of positives for Nick tonight.”

Here are some other notes from Saturday’s Bruins-Sabres game:

— This was the first time this season the Bruins were down two goals and completed the comeback. They started off slow, and looked like a team that hand’t played in 16 days. But, as we’ve seen so many times this season, they came alive in the third period.

“Good resiliency in the third to stay with it,” Cassidy said. “… I thought we did a lot of things well when we were behind.”

— Jake DeBrusk looked probably the most confident he has on the ice since his trade request became public. He had several chances, wasn’t afraid to take shots on net and was playing with jump in his game for his 12:50 of ice time.

Cassidy liked DeBrusk’s attack of Foligno’s goal with how hard he drove himself to the net.

— Cassidy changed his lines up quite a bit heading into Saturday’s game. Most notably, Craig Smith played on the top line and David Pastrnak moved to the second. Smith ended up scoring, while Pastrnak continued his offensive struggles.

Coyle also returned to his natural third-line center position, and Cassidy overall liked what he saw.

“When you get results, you feel you made the right decision,” he said, adding he’ll watch the game while the Bruins are en route to Detroit to see if any changes need to be made moving forward.

— The Bruins can make it two straight wins against the Red Wings on Sunday afternoon. Puck drop from Little Ceasars Arena is set for 1 p.m. ET on NESN with an hour of pre- and postgame beginning at 12 p.m. 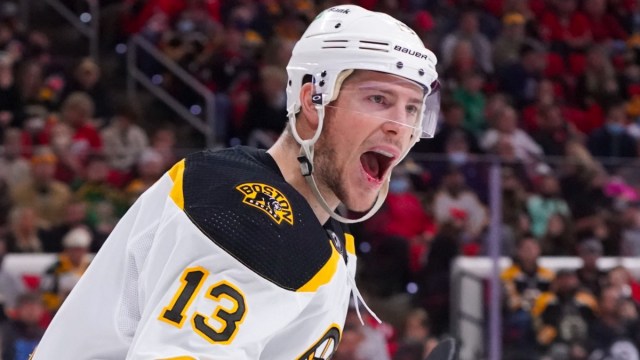 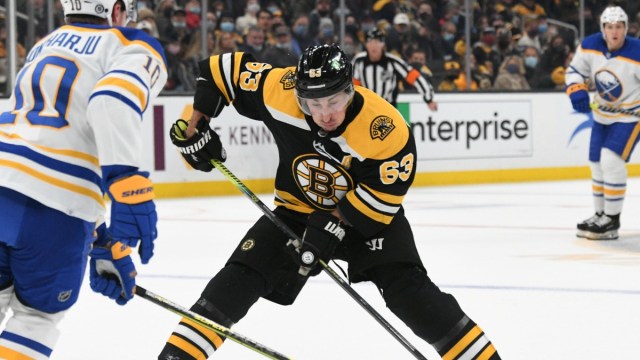