Monday night marked the first time the Boston Red Sox and Houston Astros have gone up against one another since their American League Championship Series this past October.

And the first meeting of this season between the two squads surely didn’t disappoint.

The Red Sox and Astros added another chapter to what has become a rivalry as of late with Boston scoring three times in the bottom of the eighth inning to break a 3-3 deadlock and come away with a 6-3 victory at Fenway Park.

“These organizations have been going head-to-head since 2017,” Red Sox manager Alex Cora said as seen on NESN postgame coverage. “We’re very familiar with each other and it was a good baseball game.”

Since 2017, the Red Sox and the Astros have taken turns at ending each other’s campaigns in the postseason. Houston defeated Boston in the divisional round in 2017 before the Red Sox returned the favor the following year in the ALCS on their way to a World Series title. The two sides met again last season with the Astros coming out on top in six games.

That playoff series wasn’t far from J.D. Martinez’s mind as he drove in the go-ahead run in the eighth with a double to cool off a Houston squad that came in having won 12 out of its last 13 games.

“They’ve been playing hot. We kind of haven’t,” Martinez told NESN’s Jahmai Webster following the contest. “Coming off a good series against Texas, coming in, we’re playing against these guys after last year in the playoffs, we all remember what happened last year. So, every time we play them there’s a little bit more energy I would say.”

Here are other notes from Monday’s Red Sox-Astros game:

— Martinez continues to tear the cover off the baseball. He went 2-for-4 in the contest with an RBI as he extended his hitting streak to 17 games.

— Trevor Story seems to be getting on track at the plate after a dreadful offensive start to begin the season. Story delivered in the clutch with the Red Sox trailing by a run in the bottom of the seventh. He launched a pitch 428 feet over the Green Monster off Houston reliever Phil Maton to level the score at three-all.

For Story, who also had a walk in the contest, it was his second homer in his last five games as he is up to a .200 batting average on the season.

“Just grinding,” Story said as seen on NESN postgame coverage. “Just working really hard to get it right and make the right adjustments. Steps in the right direction tonight, so that’s great to see.”

— The Red Sox and the Astros both had to endure an hour-and 38-minute rain delay, but Boston didn’t lose focus and Story said the team received a boost from the fans that were still in attendance.

“They’re right there, a little more intimate and they gave us energy, man, and they always do,” Story said.

— Matt Strahm proved pivotal for the Red Sox with his performance out of the bullpen. Strahm pitched 1 2/3 scoreless inning and struck out three to earn the win.

— Houston starter Jake Odorizzi exited the game in scary fashion after pitching five solid innings in which he allowed just three hits and one earned run while striking out four. Odorizzi suffered a lower left leg injury while he recorded the final out of his outing and had to be stretchered off the field. 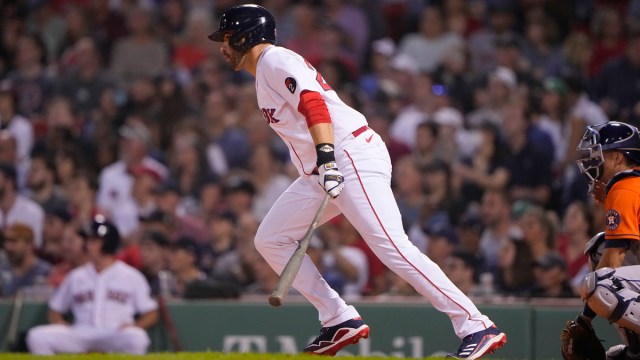 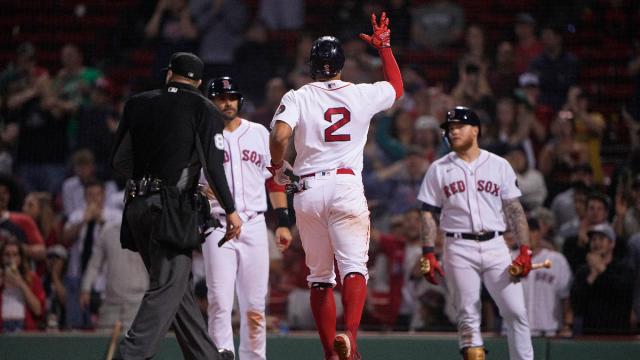