The Rangers are not going away in the American League wild-card race.

Despite having two of their best players banged up — third baseman Michael Young (hamstring) hasn?t played since Sept. 1, and center fielder Josh Hamilton (back) hasn?t played since Sept. 2 — Texas continues breathing down Boston?s necks like Michael Myers at a sorority house. Entering play Friday, the Rangers are 7-2 this month and two games behind the Red Sox in the standings.

But that?s where the roads diverge.

Unlike the Red Sox, the Rangers have nothing to lose. If Texas doesn?t make the playoffs, its season won?t be considered a failure. Sure, there will be disappointment, but for the Rangers, just being in a pennant race will be seen as success, a sign of progress, a steppingstone to a brighter tomorrow. They will enter the offseason with hope, looking forward to building on their achievements in 2010, excited about the opportunity to turn their winning record into an actual mid-October series.

If the Red Sox don?t make the playoffs, Armageddon will seem more pleasant than the full-blown crisis/panic that will engulf Boston. There will be calls to dismantle the team, riots in the streets and burnings and hangings in effigy. No one will be spared. Fingers will pointed at everybody from the manager to the Fenway Park peanut vendor.

Would it be unfair? Absolutely.

The Red Sox have become the Yankees in the sense that any season that doesn?t end with a World Series championship is a bust.

The Rangers are a decade of playoff Octobers and a ring away from that mindset. And that?s precisely what makes them so dangerous. A team with nothing to lose has everything to gain without being burdened by great expectations. Look at the 2008 Tampa Bay Rays and 2007 New York Giants.

The 2009 Rangers are hoping to be the next team to play shocker. They aren?t the all-hit, no-pitch band of also-rans who usually are planning hunting trips and South Pacific cruises this time of year. Texas still mashes, and Mike Maddux and Nolan Ryan?s Hall of Fame pitching pedigrees have turned the staff into one of the best in the AL. The Rangers rank fourth in the league in ERA (4.25), batting average against (.258) and WHIP (1.36) ? and they believe they can get the job done on the mound.

The Rangers represent a very real threat to the Red Sox? chances of making the postseason, but the Red Sox have never run from a challenge. And don?t expect them to start anytime soon.

The Ranger menace could be just what the Red Sox need. Now Boston is going to have to fight for its right to keep playing. The Red Sox won?t be able to waltz into the playoffs or sneak through the back door. They are going to have to earn their ticket. It will be tough, but it will make the Red Sox tougher ? and give them some momentum heading into the postseason.

That?s the way the Red Sox must approach this stretch run. Teams like the Rays, Orioles, Royals, Blue Jays and Indians have nothing left to play for except pride and will be looking to spoil Boston?s season. Teams like the Angels and Yankees will be gearing up for the second season and looking to make it a very long winter for New England.

Every game matters more when a playoff spot isn?t already secured. Every at-bat and pitch is magnified. The focus has to be sharper. There is little margin for error. In a way, every game from now until the end of the regular season is a playoff game for the Red Sox.

If they can survive the gauntlet, they will be as prepared as any team in the majors for the real thing.

Rays Back in Familiar Position in September

Welcoming in a Fresh NFL Season 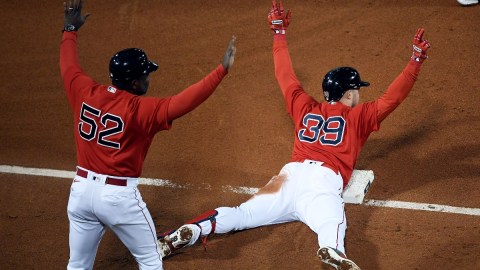