He's only played a few games, but it's not often that a rookie offensive lineman causes as much excitement as Sebastian Vollmer already has.

Vollmer, a 6-foot-8, 315-pound monster, has been hard to miss since filling in for an injured Matt Light in Week 5. The Patriots lost that game, but Vollmer held his ground well. Since then, he's only gotten better, with his most recent feat coming against the Dolphins, when he helped keep the outspoken Joey Porter from recording a tackle.

His ability to protect Tom Brady, open running holes and hustle to the flat on screen passes has already opened the door to speculation that Light may not be handed his job back once the veteran's knee heals.

But as good as "Seabass" has been thus far, this week's Sunday night matchup in Indianapolis will serve as an indication of just how ready the 25-year-old is to lock down the left tackle position. The Patriots will be playing in a noisy Lucas Oil Stadium, a locale which may not equal the decibel level of the RCA Dome but can still play tricks on visiting teams.

To combat the noise, Brady and the Patriot offense will have to rely on a silent count, a tactic that limits false-start penalties but gives an advantage to pass rushers.

"You either [snap the ball] on the second head bob or the pause between the head bobs or that kind of thing," Bill Belichick said in his weekly appearance on WEEI on Monday. "You try to change it up on [the defense], but it's hard. A lot of times it's just tougher for the offense."

Belichick explained that the silent count isn't a complete disadvantage to the offensive linemen, though, as they, too, can pick up on the rhythm and get off the ball at the same time as pass rushers.

"The problem," Belichick said, "is when you're just a half a step late, then it's all over. … Those are not only tackles and sacks, they're usually strips."

The noise in Indy didn't faze the Patriots too badly last year, as Nick Kaczur was the only Patriot penalized for a false start in the Colts' 18-15 win. In 2007, when the Pats won 24-20, New England wasn't flagged for any false starts.

Vollmer didn't play football until he was 14, and he joined the University of Houston as a tight end. Though he eventually established himself at left tackle, his history was enough to scare away most coaches. Vollmer wasn't even invited to the NFL combine, so when the Patriots selected him in the second round of the draft, many experts thought it was a reach.

It's only been four games, but those experts appear to be wrong.

Light, who is still among the best in the game at the position, is expected to recover from his knee injury this season. His availability is still unknown for this Sunday's matchup, but Belichick seemed fairly comfortable with Vollmer on the left side.

"He?s very competitive, he?s tough, he?s long," Belichick said at his Monday news conference. "He?s pretty athletic and he can stay with quicker guys and he can hold up to the stronger guys and play with the guys that have combinations of those two skills. And his techniques are improving — his footwork and his hands and seeing things. It?s not perfect. He has plays that he can certainly learn from, but he?s got more good ones than bad ones and that?s heading in the right direction. He?s working hard."

This Sunday, against the undefeated Colts, he'll have to work harder than he's ever imagined. With Dwight Freeney lining up against him for upwards of 50 snaps, and with the crowd volume rising with the importance of each play, Vollmer will be in an environment that he's never seen before.

If he and the Patriots can come out victorious, then it may no longer be premature to believe that the Patriots have their left tackle of the future. 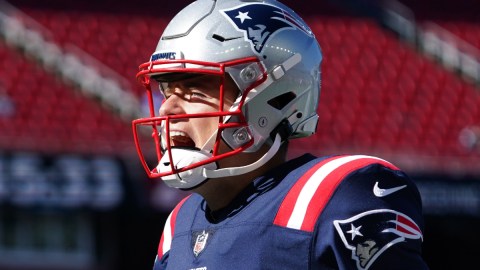 Why Patriots’ Mac Jones Eats This Unusual Meal Before Every Game