Final, Pistons 104-92: The Pistons have redeemed themselves against the Eastern Conference-leading Celtics, coming away with a 104-92 victory on Wednesday night.

The Celtics never seemed to have the momentum with them, and the loss of Kevin Garnett nine minutes into the first quarter definitely did not help their case.

Garnett suffered a lower leg injury as he was taking off for a dunk in the first quarter. The X-rays taken on the leg came back negative for fractures, and it has been established that it is not a knee injury. The injury in question is Garnett's calf muscle. The power forward will undergo an MRI on Thursday to determine the full extent of the injury.

Celtics captain Paul Pierce posted 33 points in the outing against the Pistons, but it wasn't enough to turn Boston's sluggish offense around. The Pistons had control from the get-go, and the Celtics never caught up.

The Celtics also committed a season-high 21 turnovers in the loss, giving up 23 points to the Pistons as a result.

Fourth Quarter, 1:00, 102-88: That's all she wrote in this one. Rivers takes his starters out, and the Celtics reserves will finish this disappointing loss in Detroit.

Fourth Quarter, 1:32, Pistons 100-86: The Celtics have committed a season-high 21 turnovers in this one, while a layup by Chris Wilcox pushes the Pistons into double digits.

Fourth Quarter, 2:31, Pistons 98-84: And here we thought Rodney Stuckey's absence would be a blessing. Not so much. Tracy McGrady is on a tear for 17 points in this one and just drained another three pointer.

Fourth Quarter, 3:45, Pistons 91-80: Paul Pierce isn't giving up in this one. The Truth has 29 points on the night, and continues to drive to the net to create plays for the C's. Too bad the Celtics can't seem to follow his lead.

The Pistons, on the other hand, are making all the right shots when they need it, draining clutch jumpers and drawing fouls to keep the Celtics at bay.

Fourth Quarter, 6:31, Pistons 87-75: It'd be nice to say that things are getting better for the Celtics as the game wears on, but that just is not the case. It's clear the Pistons' chippy defense is affecting the Celtics offense, as Big Baby fumbles an attack toward the net and dings it off the front of the rim.

Fourth Quarter, 8:52, Pistons 83-73: Villanueva sinks another three pointer, and gives an extra-long stare to the Celtics bench. It's clear he is not over his November spat with Garnett.

Jermaine O'Neal converts a three-point play for the C's to bring them back within ten points, and takes a charge on the other end to hopefully pick up the pace.

Fourth Quarter, 9:24, Pistons 78-68: The Celtics find a snippet of momentum, and it's snatched away by the referees whistle. Marquis Daniels sinks back-to-back layups, but a Von Wafer foul and a three-second violation by Jermaine O'Neal sink the C's back into sleep-mode.

Fourth Quarter, 11:41, Pistons 77-64: ?Pierce has a "spirited" discussion with his teammates in between quarters, but it doesn't resonate through the first few minutes of the fourth. Jermaine O'Neal bobbles the ball at the top of the key and watches Greg Monroe come away with the steal.

End of Third Quarter, Pistons 74-62: You can see Paul Pierce trying to get something started for his team, as he is leading any significant attacks toward the net. Unfortunately, the captain's attempts aren't translating to his teammates. Pierce leads the C's with 20 points through the the third quarter.

Third Quarter, 1:15, Pistons 71-56: With Kevin Garnett out of the matchup, Charlie Villanueva has regained his focus, knocking down back-to-back threes in the third. He has 11 points in the second half after leaving early due to foul trouble.

Third Quarter, 5:20, Pistons 63-50: When you get schooled by the aging Ben Wallace, you know you're in trouble. The Celtics committed their 17th turnover, leading to a fast break play resulting in a dunk by Wallace.

Pierce responded with a three-pointer on the Celtics end, but that will sting for a while.

Third Quarter, 5:47, Pistons 61-47: It's moments like these where you realize just how much the Celtics miss Rajon Rondo and his transitional game. The Celtics offense has been slow at best this game, lacking any real playmaker to get things going. That's where Rondo steps in and makes things happen.

The 16 turnovers don't help, either.

Third Quarter, 7:25, Pistons 53-47: Ray Allen knocks down his first 3-pointer of the game and follows it up with a nice drive to the net. The Celtics need someone to carry the team on their back a bit here, and hopefully someone will step up in the second half to ignite a turnaround.

Halftime: The X-rays came back negative for Kevin Garnett, but the power forward isn't out of the clear yet. He will likely undergo an MRI on Thursday to determine the full extent of his injury.

End of First Half, Pistons 47-35: Shaq had the opportunity to send the Celtics out of the first half on a somewhat positive note, but he flubs up an easy layup.

The sluggish first half leave the Celtics without Kevin Garnett, trailing by eight points. No news on the results of KG's X-rays yet, but it's clearly not an ankle problem.

The true culprit of this one is the Celtics' dismal offense. The C's are just 14-of-34 shooting, with Pierce leading the way with nine. The Pistons are riding a lead behind Austin Daye (12 points) and Ben Gordon (10 points).

Second Quarter, 0:20, Pistons 45-37: The starters re-enter and give the Celtics a small burst of energy. Back-to-back buckets by Pierce and Shaq bring the Celtics cut the deficit to six points. They'll need a lot more to get their momentum back in this one.

Second Quarter, 2:41, Pistons 43-32: The Celtics are struggling to put any organized offensive attack together. The reserves are out on the floor, and even Big Baby is having a hard time getting anything going. He's -8 on the night with six points.

Second Quarter, 3:33, Pistons 43-32: X-rays have been completed on Kevin Garnett's leg, as he gingerly walks back to Celtics locker room. The limp is present, but it's not significant by any means, though Garnett is leaning on the shoulder of Lacerte.

In the meatime, Daye knocks down another three, he's 5-for-5 off the bench.

Second Quarter, 5:26, Pistons 38-30: To start off the first quarter, it was Gordon who was leading the charge for Detroit. Now it's Austin Daye, who is 4-for-4 since entering the game late in the first. Daye just knocked a three-pointer, and followed it up with a steal from Avery Bradley. Celtics already have 11 turnovers in this one — Doc calls for a time out.

Second Quarter, 6:38, Pistons 35-30: Kevin Garnett will not be returning to this one folks. The power forward has a reported lower right leg injury and is heading for X-rays.

Second Quarter, 8:03, Pistons 33-25: The Celtics are desperately seeking an inspiring performance from someone here. The C's bench are out on the court, hoping for a similar revival as last night in Indiana.

Von Wafer takes the first legitimate drive to the net, hoping to spark something with the reserve crew.

End of First Quarter, Pistons 27-21: Though Kevin Garnett's knee twist looked fairly painful, the forward walked without a limp into the locker room with the team trainer, Eddie Lacerte.

The Celtics, however, need a stronger effort behind their game, as they trail the Pisons by six heading into the second. The Pistons went on a 20-11 run late in the first.

First Quarter, 2:31, Pistons 23-16: It's the grimace no Celtics fan wanted to see this season. After a commanding slam dunk, Kevin Garnett comes down limping and wincing. It seems the power forward hurt his knee when he was jumping off to dunk. He is testing out the leg on the sidelines.

First Quarter, 2:55, Pistons 23-14: Detroit's nine-point run, combined with the Celtics' seven turnovers gives the Pistons an early lead in the first. Rivers calls a full timeout to get his players moving in the right direction.

Glen Davis checks in for the first time, giving Shaq a rest.

First Quarter, 4:47, Pistons 16-14: Paul Pierce picks up his first personal against Tayshaun Prince, whose fadeaway jumper in the last possession gave Detroit the two-point lead. Prince heads to the line.

On a positive note, Shaq has no fouls yet in this matchup. Fouls have been an issue for Shaq as of late. He did have a nice block against Ben Wallace, however.

First Quarter, 6:46, 10-10: Robinson is going to have his work cut out for him defending Gordon. The shooting guard has nine of Detroit's first 10 points. Robinson will have to stay in his face to keep him contained. Gordon's dangerous if you let him catch fire.

First Quarter, 9:03, Pistons 7-6: Charlie Villanueva's already in trouble early, drawing two fouls against Garnett. The early calls distract the power forward, as he flubs an early rebound out of bounds. He heads to the bench just three minutes in — not without a little shove past KG on the way out, however. He's clearly not over the alleged comments.

First Quarter, 10:50, Celtics 6-4: Nate Robinson and Paul Pierce knock down back-to-back threes to open things up, but Ben Gordon responds with two field goals of his own. Good for Robinson to get that first three out of the way.

First Quarter, Tipoff: No greeting between Charlie Villanueva and Kevin Garnett, but did we really expect a friendly hug? The duo set up on opposite ends of the circle, and KG brought down the tip.

7:36 p.m.: The Celtics may have a solid crop of bench players, but head coach Doc Rivers is concerned with the Pistons' veteran bench. It's one of Doc's keys to the game, in addition to playing consistent defense through four quarters.

7:30 p.m.: It will be interesting to see how Marquis Daniels performs after propelling the C's to their late victory on Tuesday. Paul Pierce may have led the night with 21 points, but it was the Celtics' bench that got them within fighting distance.

7:05 p.m.: The Pistons announced some good news for Celtics fans. Rodney Stuckey will not be playing, as he is the latest player to fall at the hands of the dreaded flu. Tracy McGrady will get the start at point in his place.

Stuckey was one of the greatest threats to the Celtics' success on Wednesday night, especially without Rajon Rondo in the C's starting lineup.

6:55 p.m.: Expect a few old sparks from the Celtics-Pistons rivalry to flare up in Detroit on Wednesday night. Though both players are downplaying their rematch, it's clear Charlie Villanueva is still simmering over Kevin Garnett's alleged comments last month.

"This is what you guys want to see right?" Villanueva said when reporters asked about the underlying competition with Garnett. "I'm ready to do whatever it takes to get a win on Wednesday."

8 a.m.:The Pistons may sit low in the standings, and may be riding a two-game losing streak, but they are also on a day's rest, and will be looking for revenge after a rough outing in their last matchup with the Celtics last month.

The C's came away with a cushy 109-86 victory on Nov. 2, but it was the repercussions of the matchup that left the NBA buzzing. Wednesday night's rematch between the Celtics and the Pistons will be the team's first meeting since Kevin Garnett allegedly called Charlie Villanueva a "cancer patient."

While the details of the controversy is water under the bridge for Garnett, one can bet that Detroit fans will do anything in their power to get into Garnett's head as the Celtics roll into the Palace to close out their three-game road trip.

The Celtics, however, should put this one away easily if they play their game and get out ahead early. 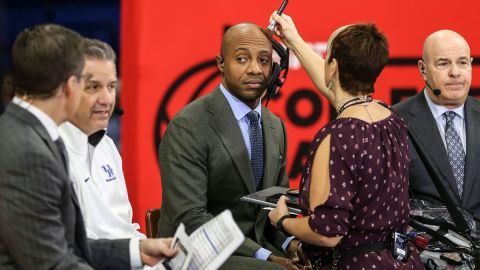