Much of Celtics Nation is waiting for the other shoe to drop.

For the fourth straight season, their team has jumped out to an incredible start. In the first 20 games of those seasons, in fact, Boston is a combined 68-12.

And yet, in their last two regular-season campaigns, the Celtics’ hot starts have been tempered by subsequent falling-off-a-cliff-type records. In 2008-09, a 27-3 start fell victim to “The Injury.” Without Kevin Garnett, Boston went 18-9 through the final 28 tilts of the season.

So what about 2010-11? Boston, per custom, is rolling in the early going. The C’s are 16-4, with two wins over the vaunted Miami Heat, two over the much-improved Chicago Bulls and another against the Kryptonite Atlanta Hawks. Rajon Rondo averages 14 assists per game (the only other to do so for an entire season was John Stockton); KG’s knee looks better than ever; Ray Allen is shooting 42 percent from deep.

But this season, for five reasons, will be different.

1. KG
Much of Boston’s drop-offs in the last two seasons can be attributed to the loss and/or ineffectiveness of the Big Ticket. Even when he was available, he hobbled up and down the floor. He couldn’t rotate fast enough on defense and seemed uncomfortable on the offensive end, averaging just 14 points and seven boards a game in the 2009-10 campaign.

This season? New guy. The Rondo-to-KG alley-oop is back. Now a 34-year-old, he’s driving to the hoop, converting up-and-under reverse layups (I don’t remember him doing that even back in his Timberwolves days) and ranting and cursing his way up the floor like the KG of old. And his numbers show it: 15.6 points, 10 boards and 1.6 steals.

Chris Bosh couldn’t stop him. Joakim Noah couldn’t, either. Barring another injury, no one can.

2. The Big Insurance
Even if Garnett’s knee were to suffer a setback, Shaquille O’Neal has shown he’s capable of taking the reins. Sure, at 38 years old, he’s already had to sit out some contests with minor aches and pains, but the encouraging sign is this: In the few games in which O’Neal had to log considerable minutes, he’s been impressive: 25 points (9-of-10 shooting), 11 boards against New Jersey; 14 points on 5-of-7 shooting against Portland.

And lest we forget, Doc Rivers still holds Kendrick Perkins (due back in February) and Jermaine O’Neal (likely due back in late December or early January) in the bank.

3. NateRob
Ever since the Celtics landed Rondo in 2006, they’ve been searching for a reliable backup point guard. Sam Cassell in the title year was probably the closest they came, and he was 85 years old.

Enter Nate Robinson. Does he shoot a bit too often? Yes. Is he occasionally a liability on defense? Yes. But for a reserve, this guy is solid. He forces defenses to guard him on the outside, he can penetrate the paint with his quickness and he can be a nuisance on defense.

All told, in just 20 minutes of play per game, he’s averaging 7.7 points (on a very respectable 47 percent shooting), 2.4 assists to just 0.8 turnovers and he’s 38 percent from 3-point range. Perhaps most encouraging is that when Rondo sits, Boston still wins — 3-1 with Robinson starting at the point.

4. Which leads us to … the rest of the bench
Sure, the reserves have been problematic at times, particularly toward the early part of the season, but they have begun to click. With Glen Davis leading the charge, they dropped 42 points as a unit against New Jersey on Sunday. Four nights prior to that, the bench outscored Portland’s reserves 21-16 en route to a four-point W.

There’s no doubting that second unit is deeper than at any other time during the Big Three era. And that’s with Perkins, J.O. and Delonte West all out with injuries.

5. Protect the Garden
Unlike last season (when they were 24-17 at home), the C’s are picking up the key wins at home. Of their four losses, just one came at the TD Garden, a 89-84 stinker against Oklahoma City on Nov. 19.

“I just know we’re winning [at home],” Doc said after a Nov. 17 win at home over Washington. “I don’t know why. Like I said last year, I didn’t know why we were losing games. We just didn’t play with energy and didn’t play well.

“Right now, we are playing well.”

Well, indeed. And the chances that the Celtics, currently on pace for 66 wins, can keep this rhythm throughout the season, seem to be good. If they do, they’ll finish with the same record they had in 2007-08 — the last time they won it all. 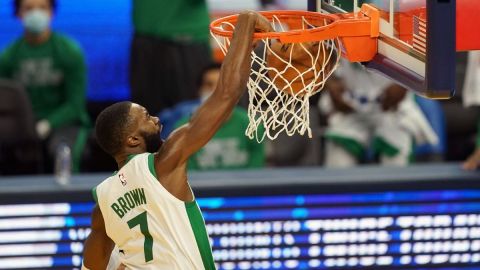