During his time in the NBA, Boston Celtics head coach Doc Rivers was always known as more of a passer than a scorer. But his 19-year-old son, Austin, a freshman guard at Duke, appears to be quite the opposite.

Austin Rivers and his Blue Devils teammates took the floor in Chapel Hill against in-state rival North Carolina for the first of the teams' two meetings this season. Needless to say, Rivers left an unforgettable impact on the rivalry in just his first appearance in the Battle of Tobacco Road.

With under 13 seconds to play in the game and Duke trailing the Tar Heels, 84-82, Rivers calmly brought the ball up the floor and prepared for the game's final play. But orchestrating the play wasn't enough for Rivers on Wednesday night, as the 6-foot-4 guard milked the clock down to just three seconds before deciding to pull up from well beyond the right arc to drain the game-winning three-pointer for the Blue Devils.

Check out the video below to witness the unbelievable game-winner for yourself. 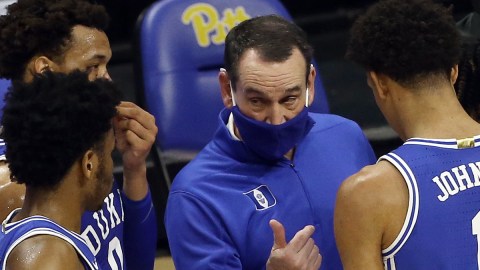