Rajon Rondo spent the early part of this season stalking Magic Johnson‘s record of 46 straight games with double-digit assists. Rondo took the streak so seriously he allowed himself to be kept in the game into the final minute of a loss in Detroit just to notch that decisive 10th assist to keep his run alive.

Rondo’s streak eventually ended at 37 games, which tied John Stockton for the second-longest streak behind Johnson. It was an achievement that spoke to Rondo’s abilities as a playmaker. It was also a record Johnson did not even know he had.

“I knew it after ESPN ran it,” Johnson said, laughing, during a conference call Friday. “They were keeping the count on Rondo, and they had me up there as No. 1. I did not know they had that record.”

Johnson, who is an analyst for ESPN, went on to say he never played for records — “I just played for the championship” — but he was not belittling Rondo’s feat. Johnson praised Rondo for bringing back the role of the classic, pass-first point guard.

Earlier in the conference call, Johnson had called Chris Paul the best point guard in the league. He then bestowed that title, with a slight tweak, on Rondo.

“First of all, to me, Rondo is the best all-around,” Johnson said. “There’s nobody even close to him as far as all-around, when you think about scoring, rebounding, assists, he’s No. 1. I think a pure point guard, Chris Paul, and he’s right there with Deron Williams. Rondo, Deron Williams, all those guys are right together. It’s amazing when you think about the crop of point guards we’ve got. But I would say Rondo is the best all-around point guard we have in the league.”

If you are trying to figure out how Rondo could be a “classic” point guard but not as good a “pure” point guard as Paul, you are not alone. Judge for yourself in the complete transcript below via Sports Business News.

Question: Earlier this year Rajon Rondo tied John Stockton for the second?longest double?digit assist streak.  You have the record, I think it?s at 46 games.  I was wondering if you knew about this record when you said it, or when you found out, that you even had this record.

Question: You did not know until I told you about it?

No, I knew after ESPN ran it ?? they were keeping the count on Rondo, and they had me up there as No. 1.  I did not know that they had that record.

You know, I never played for records. I just played for the Championship. But I?m happy that Rondo ?? Rondo has done a lot for bringing back the classic point guard. And now us and the media are paying attention to records like that, but also players like Rondo, making sure that the point guard is getting the spotlight once again.

So Rondo has been tremendous and, also, too, Rondo has done a wonderful job of making us realize that the triple double is a tough feat. He is awesome. I think if the Celtics are going to be the team that they want to be ?? I?ve said this the last few times that:  Rondo, not only does he have to get a lot of assists, but he?s going to have to score more.

Question:  Where would you rank him as the point guard in the league?

First of all, to me, Rondo is the best all?around. There?s nobody even close to him as far as all?around, when you think about scoring, rebounding, assists, he?s No. 1. I think a pure point guard, Chris Paul, and he?s right there with Deron Williams. Rondo, Deron Williams, all those guys are right there together. It?s amazing when you think about the crop of point guards we?ve got. But I would say Rondo is the best all?around point guard we have in the league. 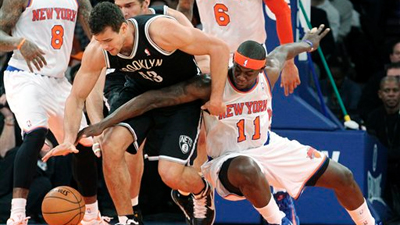 Magic Johnson Says Paul Pierce is ‘Little Brother,’ ‘One of the Greatest That’s Ever Played the Game’