Pat Riley is not happy.

On Thursday, Celtics president of basketball operations Danny Ainge let his feelings be known about LeBron James and his complaints about officiating. After James complained that the Chicago Bulls got away with flagrant fouls that weren’t called during their 101-97 victory over Miami, Ainge called James’ protests “embarrassing.”

?I think the referees got the calls right. I don?t think it was a hard foul,? Ainge told WEEI. ?I think the one involving LeBron against Boozer, that was flagrant. I think the officials got it right. I think that it?s almost embarrassing that LeBron would complain about officiating.?

A day later, Heat president Riley fired right back at Ainge, not only admonishing his fellow NBA executive for the comments, but taking shots at Ainge’s perceived toughness, as well.

“Danny Ainge needs to shut the [expletive] up and manage his own team,” said Riley in a statement made through a team spokesperson. “He was the biggest whiner when he was playing, and I know that because I coached against him.”

We’ll see if the war of words escalates any further, but either way it ought to add some intrigue the next time the two teams meet, on April 12. 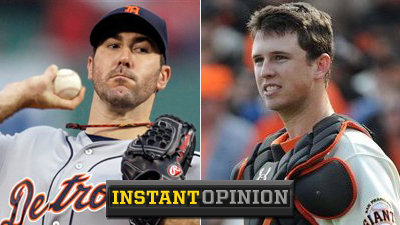