Tayshaun Prince does not do a whole lot of dunking anymore. At 33 years young, Prince’s high-flying days are mostly behind him. The Kentucky product has not completely lost the ability to get up and throw one down on occasion, though.

In the third quarter of Wednesday’s Game 5 in Oklahoma City, where the Thunder were making a last-gasp attempt to stay alive in their Western Conference semifinal series against the Grizzlies, Prince showed he still has some pep in his step. Memphis point guard Mike Conley got the ball on the break and found the trailing Prince streaking down the left wing.

As Prince rose up, Thunder forward Serge Ibaka tried to meet him and block the shot, but Ibaka was a hair late. Instead of notching a block, Ibaka ended up on a poster.

Check out Prince’s dunk in the video below. 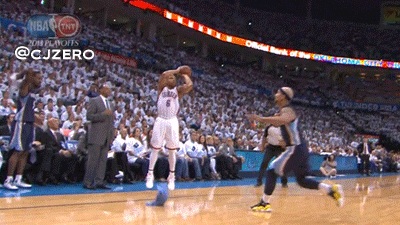