Tony Parker Long Overdue to Be Appreciated as One of NBA's All-Time Greats - NESN.com Skip to content Tim Duncan has said it all starts with Gregg Popovich, while Pop insists it all started with David Robinson. Exactly who set the foundation for the Spurs to become the model NBA franchise is a matter of respectful debate, even within the organization’s own ranks. What’s more, there is some dispute over whether the future lays with second-year swingman Kawhi Leonard or some as-yet unknown franchise centerpiece.

What cannot be disputed is who controls the Spurs’ present. San Antonio is Tony Parker‘s team, as it has been for going on six or seven years, and all it takes for the casual fan to realize that, apparently, is for Parker to be on the precipice of winning a fourth championship ring.

Few jobs in sports are as challenging as playing point guard for Popovich. A generation ago, Avery Johnson toiled under Pop’s yoke, enduring criticism from coaches, fans and reporters alike until his clutch jumper in Game 5 of the NBA Finals helped deliver San Antonio’s first title. It was never easy for Parker, either.

After the Spurs made him the last pick of the first round of the 2001 draft, Popovich entrusted Parker with about as much responsibility as the ballboy en route to the 2003 title. Parker famously had to lobby hard to keep his job and prevent Popovich from signing Jason Kidd. On a team where not even Duncan is insulated from criticism, Parker has served as his coach’s main whipping boy.

Somehow, through a quiet will and a rare European game with a playground flair, Parker kept coming and kept improving. He held his own in the 2005 Finals against Chauncey Billups, then one of the NBA’s strongest and toughest point guards. He posted the third-highest field goal percentage in the league in 2005-06 despite having no jumper to speak of. In 2007, he helped make up for Manu Ginobili‘s drop in playoff production by scoring 20.8 points per game and earning Finals MVP honors for the squad that swept the Cavaliers in LeBron James‘ first Finals appearance.

Still, Parker seldom gets his due when lists are made of the NBA’s greatest active players, much less point guards. He is less than three years older than Chris Paul, the consensus pick as this era’s best floor general, but Paul has some work to do to match Parker’s career resume. Steve Nash won his first of back-to-back Most Valuable player awards in 2005, yet his Suns were knocked out of the playoffs by Parker’s Spurs. Rajon Rondo can scoff at the ringless Paul, Russell Westbrook and Derrick Rose routinely being placed ahead of him in the rankings of the NBA’s top point guards, but he can’t scoff at Parker’s jewelry collection.

On the heels of the Spurs sweeping the Grizzlies out of the Western Conference finals, the long-awaited appreciation for Parker finally may have arrived. He dropped 37 points, one for each year Duncan has been on this earth, in Monday’s deciding Game 4, and he is poised to get another crack at James, albeit this time with James in a different uniform. SportsCenter led its NBA coverage on Tuesday morning with highlights of Parker, although the program quickly (and wisely) switched to talking about James. Hey, they’ve got to pay the bills.

One day, Parker is going to call it quits and there will have to be a long, serious conversation about where he sits in the pantheon of the game’s all-time greats. He will belong in there, somewhere, and we know this because that day is a long way off. Parker has a lot of time left to stuff his cabinet with even more trophies. He just turned 31 earlier this month, and the Spurs’ young core of Leonard, Tiago Splitter and Danny Green are positioned to keep the team relevant for several more years, even as Duncan and Ginobili’s skills decline. Parker and the Spurs could be back at this point four years from now with a roster that looks very different aside from Parker and Popovich, the guys who run the show.

Regardless of what awaits in the upcoming Finals, Parker is already firmly entrenched as one of the game’s best. He is the link from the Spurs’ post-oriented past to its wing-dominated future. But right now, this time is his. 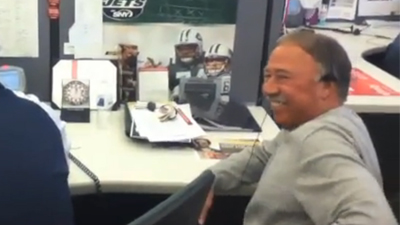 Jerry Remy to Miss a Few Games Because of Allergies, Dennis Eckersley, Rob Bradford to Pinch-Hit