Floyd Mayweather Wants 'Twerk Queen' Miley Cyrus to Be His Ring Escort for Next Fight - NESN.com Skip to content Look out, Justin Bieber, the Twerk Queen is coming for your spot.

Fresh off of his win over Saul Canelo Alvarez, boxer Floyd Mayweather made his way to the iHeart Radio Music Festival in Las Vegas this past weekend to visit some of his favorite artists and be seen. Apparently, Miley Cyrus is one of the artists currently on repeat for the boxer. Mayweather sat down for an interview with Billboard and revealed that he’s interested in having the former Hannah Montana star as part of the Money Team.

Being the incredibly polarizing figure that she is, Cyrus could be the perfect candidate to escort “Money” Mayweather into the ring for his next fight. She certainly wouldn’t be the first teenybopper to bring Mayweather out, as Bieber was part of the entourage before the Alvarez fight.

?When you’re the best, you only want to surround yourself with the best, and he’s an exceptional artist,? Mayweather said. ?He’s the future.?

Shaq is stronger than your average bear.

Couldn’t have said it better. 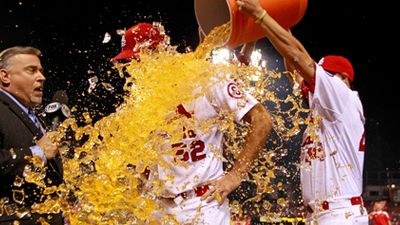