BOSTON — Concussion and head injury experts all agree that conclusions and steps forward are tricky when it comes to the relationship between football and brain damage.

What Frontline?s new documentary shows, however, is that there would be a better chance of conclusions and steps forward had the NFL not spent the last two decades systematically attacking concussion research it didn?t like while producing its own flawed findings.

In League of Denial: The NFL?s Concussion Crisis, Frontline?s Michael Kirk and ESPN?s Mark Fainaru-Wada and Steve Fainaru detail the path the NFL has taken since concussion pressures first arose about 20 years ago. The documentary airs Oct. 8 at 9 p.m. and coincides with the release of the Fainaru brothers? book, League of Denial: The NFL, Concussions and the Battle for Truth, which was part of the PBS project. Frontline is produced locally in Boston by WGBH.

In the documentary and book, which have been released in parts as the Fainarus conducted research for more than a year, details are given about how the NFL and commissioner Roger Goodell discounted findings from the science and medical communities as research increasingly showed that football players were in danger of long-term brain damage.

The documentary opens by talking about Mike Webster, a former Pittsburgh Steelers linebacker who died in 2002 at the age of 50. It could have chosen any other of the many former NFL players whose lives have been destroyed by degenerative brain disease, but Webster was the first — and remains one of the most harrowing — of those former football players who disintegrated as the NFL hid or refused to look further at concussion evidence.

League of Denial mixes interviews with leading scientists and researchers, anecdotes from former players and their families, and liberal amounts of head-crushing game footage as it details the NFL?s response to concussion concerns over the years. The NFL first acted in 1994 when it started its Mild Traumatic Brain Injury committee, a group that immediately tipped off anyone looking closely that the NFL didn?t think head hits were causing any real damage.

The committee, led by a rheumatologist rather than a neurologist and packed with NFL insiders, proceeded to publish studies over the following years that suggested that concussions were not harmful, including claims that players could return to games if they were concussed, or that a repeat concussion soon after the first head injury would not cause more damage. The NFL also included phrasing that flat-out denied links between playing football and long-term brain damage.

The research community, meanwhile, was finding very different results. But even after the discovery of chronic traumatic encephalopathy, or CTE, in the brain of Webster and others, those findings could not get an audience with the NFL. In fact, League of Denial shows a record of hostility from the NFL toward independent research, from personal attacks on doctors and scientists to outright mocking of research that went against the NFL?s longtime stance.

The film draws on many firsthand experiences to trace the path of the NFL?s interaction with concussions. It starts with Webster, whose body shocked the doctor who performed his autopsy when Webster died at 50 looking like a man many years older. From feet with cracks in them so big they had to be duct-taped together to a mouth coming apart to the point that he used superglue to hold his teeth in, Webster?s body was ravaged by football — but it was his head that drew the most alarm.

Webster was found to have layers of scar tissue on the front of his skull where extra skin had built up from repeated abrasions. The real damage, though, was inside. The doctor assumed he?d find a destroyed brain based on the state of Webster?s body, but instead the brain appeared to be in excellent condition. The doctor preserved it, however, and did further testing, and his discovery that Webster?s brain, while appearing healthy, was filled with tau — the protein that builds abnormally in CTE — prompted the modern discovery of CTE and current study of concussions, especially among football players.

Webster?s family gives an account of how his life deteriorated as he began to show uncharacteristic behavior. He ended his life living out of a car, unable to get his thoughts together and fighting anger and confusion. At one point, he destroyed all his football pictures, slashing them apart. He asked a friend to use a Taser on him, because the pain would jolt him into the sleep he couldn?t get on his own.

Webster is the first of several players throughout the film who are shown to have CTE, but it?s the bits in between that are most incriminating for the NFL.

League of Denial details how the NFL used Neurology magazine and some questionable reviewing procedures to spread its ideas to the public despite researchers? objections. It follows the bullying of the Mild Traumatic Brain Injury committee?s new leader, Ira Casson, and shows how Boston University researchers started to look at brains and found incredible amounts of CTE conditions in the NFL players it examined. It talks to wives and widows and examines the NFL?s sudden change of position after congressional hearings comparing the NFL to the tobacco industry spooked the league into making some changes.

Through it all, Goodell can be heard giving a common refrain when pressed about what the NFL knows about concussions. He continually points back to science, saying the medical community has to answer those questions.

In League of Denial, Frontline may have answered them for him.

Koji Uehara Only Human, ‘Not From Another Planet’ and Other Red Sox Notes From Game 3 of ALDS 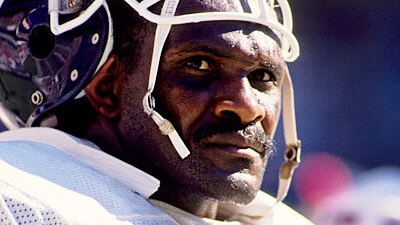