We continue with No. 4 on our list of lottery ballhogs: the Utah Jazz.

John Stockton occasionally makes appearances in Salt Lake City, looking like he could lace up his plain, white sneakers and run a few dozen pick and rolls even today. It says a lot about the Utah Jazz’s recent luck with point guards that they wouldn’t have kicked the 51-year-old off the court if he had.

For the first time in three years, the Jazz believe they actually have a suitable replacement for Stockton’s old position. General manager Dennis Lindsey traded up in the June draft to nab Michigan point man Trey Burke, filling the one remaining spot in Utah’s projected long-term starting lineup that wasn’t already filled with a youngish piece.

Enes Kanter, Derrick Favors, Gordon Hayward and Alec Burks appear to be penciled in as five through two, respectively. Other than that, the Jazz don’t have much talent-wise. Everything to like about the Jazz stems from that core of youngsters and the ridiculous financial flexibility they will have next summer. Approximately $31 million comes off the books in the forms of Richard Jefferson, Brandon Rush, Andris Biedrins and Marvin Williams, just in time to extend Favors and Hayward.

Provided at least two of the young five develop the way the Jazz hope, this is a team with a bright future and plenty of wriggle room in its payroll. The flip side, of course, is that this year the Jazz are likely to be very, very bad.

The Jazz were not much resistance to the Spurs in the playoffs two years ago, and they were a virtual lock for the eighth seed in the Western Conference last season before collapsing in the final weeks. As a result, Lindsey and senior vice president of basketball operations Kevin O’Connor stepped aside while Al Jefferson and Paul Millsap signed elsewhere. Unlike in Boston, where president of basketball operations Danny Ainge has so far held onto Rajon Rondo and Jeff Green, the Jazz are going all-in on their rebuild.

Burke has the keys, and while he is no Stockton, he is Utah’s best point guard prospect since Deron Williams. Coach Ty Corbin is notoriously tough on rookies — he is a Jerry Sloan disciple, after all — but after the debacle at that position a year ago, Corbin might have no choice but to let the rook run free. Whatever the growing pains, they cannot be worse than what the Jazz got (or didn’t get) from Jamaal Tinsley and Earl Watson when Mo Williams was injured last season.

As half of the league rushes to tank in anticipation of Andrew Wiggins‘ arrival, the Jazz have done the best job of assuring they stink while making it look like they are working hard not to. Their prize could be Wiggins, though Jabari Parker, who is Mormon, may find a home in the SLC, too. Not even the Celtics have positioned themselves as advantageously as the Jazz, either in terms of long-term promise or short-term struggles. 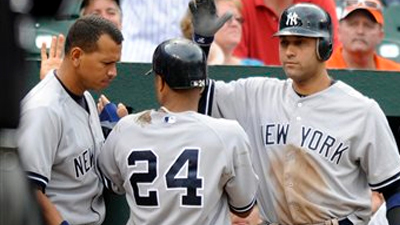