Richie Incognito Starred in Dolphins PSA Encouraging Fans to Be 'Respectful and Civilized' While at Games (Video) - NESN.com Skip to content

Richie Incognito is in hot water after Dolphins head coach Joe Philbin suspended the guard indefinitely for threatening and intimidating actions toward teammate Jonathan Martin. The 6-foot-3 lineman was well known for his aggressive and sometimes violent style of play before his harassment of Martin became public knowledge — in fact, the Dolphins produced a tongue-in-cheek PSA for fans attending games at Sun Life Stadium that featured Incognito dressed in croquet gear and urging fans to remain “respectful and civilized” at all times.

Before the Martin incident, the PSA might have been considered clever, but in light of the alleged voicemails and texts Incognito left on Martin’s phone, it seems like a bad joke. In the video, Incognito, now under investigation by the NFL and likely done with professional football, explains the “Fan Code of Conduct,” which prohibits “foul language, intoxication and fighting” — rules that Incognito lives by.

Check out the video below to see Richie Incognito wearing a cardigan and being disingenuous. 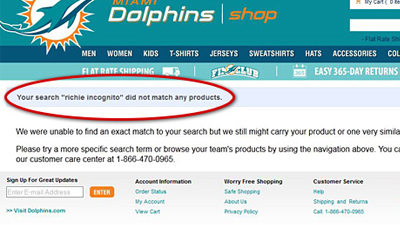