Will Middlebrooks, who figures to be the Boston Red Sox?s starting third baseman in 2014, might be the team?s most difficult player to project going into the season.

Middlebrooks? major league career has been the tale of two players. The 2012 version of Middlebrooks was one of the few bright spots amid a disastrous season for the Red Sox, while the 2013 version was a letdown amid an otherwise magical season in Boston.

It?s still possible the Red Sox re-sign shortstop Stephen Drew, which would cut into Middlebrooks? playing time, as rookie Xander Bogaerts likely would see action at third base in addition to shortstop. If Drew signs elsewhere, though, it?ll be paramount for Middlebrooks to improve upon a tough 2013, or else the Red Sox could be forced to seek additional infield depth at some point during the season.

This could be a make-or-break year for Middlebrooks with third base prospect Garin Cecchini and shortstop prospect Deven Marrero also coming up in the Red Sox?s system. Let?s dive deeper into Boston?s third base situation for 2014 and beyond.

The Red Sox will be showing a lot of faith in Middlebrooks if they don?t re-sign Drew. Middlebrooks will receive the bulk of the playing time at third base, and Boston will hope that the 25-year-old hits the ground running — something he failed to do last season — or else the team will find itself in quite the predicament.

Herrera is a nice utility player but probably not someone the Red Sox want to lean on as an everyday third baseman. Brandon Snyder, Brock Holt and Mike McCoy are among the Red Sox?s veteran minor league options, while Cecchini is an intriguing prospect, although the organization probably would prefer to see him spend the entire season in the minors.

If the Red Sox re-sign Drew, it?ll be interesting to see how manager John Farrell divvies up the at-bats between Drew, Middlebrooks and Bogaerts. Bogaerts essentially would be replacing Jose Iglesias in the infield battle that took place last season — which saw Middlebrooks get demoted and Iglesias get traded — but the expectations surrounding the 21-year-old Aruba native are much higher than the expectations that surrounded Iglesias.

-Middlebrooks still hit for power in 2013 despite his struggles, so the home runs likely will come regardless of whether he hits for average and gets on base at a reasonable clip. That could be important, as the Red Sox?s lineup is losing a speed element with Jacoby Ellsbury?s departure.

Middlebrooks has 32 career homers in 615 at-bats over 169 games — essentially a full-season sample size. Perhaps that explains why Bill James, a senior adviser in the Red Sox?s baseball operations department and the father of sabermetrics, projects Middlebrooks will hit 32 bombs in 2014.

-While Middlebrooks got off to a rocky start last year and ended the season riding the bench, there was a point in August — immediately after he returned to the majors — when he looked locked in. Middlebrooks hit .368 (32-for-87) with six homers and 16 RBIs in 26 games from Aug. 10 to Sept. 8.

-Bogaerts? ability to play third base in addition to shortstop could come in handy at some point, for whatever reason. At the very least, it?ll give Farrell extra flexibility and options if something unforeseen arises.

-Snyder and Holt are familiar faces who helped the Red Sox win a few games last season. They might begin the season at Triple-A Pawtucket, but Boston could do worse in the event of an emergency.

-Cecchini might not crack the majors in 2014, but he?s climbing the ranks. Red Sox director of player development Ben Crockett said last month that he thinks Cecchini, who likely will begin the year at Pawtucket, could hold his own at any level right now, including the majors.

-The presence of both Middlebrooks and Cecchini, as well as Bogaerts? ability to play third base, could allow the Red Sox to be more aggressive on the trade market, whether that?s during the season or next winter.

-Rafael Devers is only 17 years old, but his name could become more popular in the coming months and years.

-While Middlebrooks? 2012 production suggests his ceiling is high, his 2013 output shed light on his shortcomings as a young player. It?s entirely possible that the 2013 version of Middlebrooks — which hit .227 with a .271 on-base percentage, .696 OPS and 98 strikeouts in 94 games — is a more accurate indicator of what the Red Sox really have. It?s all about choosing to look at the glass half empty or half full.

-Middlebrooks? plate discipline needs to improve, particularly because it?s such a distinct contrast to the Red Sox?s overall offensive approach, which is centered on grinding out at-bats. (Middlebrooks walked just 20 times last season while striking out 98 times.)

-While Snyder, Holt and Cecchini give the Red Sox options in the minors, turning to any of those three players as an everyday third baseman in 2014 is less than ideal. All of the Red Sox?s eggs essentially are in Middlebrooks? basket right now, meaning there?s a lot of pressure on the third-year infielder.

It?s hard to knock anyone?s projections for the Red Sox?s third base production — or more specifically, Middlebrooks? statistical output — in 2014 because the possibilities are so wide-ranging.

Middlebrooks could blossom into an All-Star-caliber player like he was expected to last season, or he could flop again, creating a major dilemma on the left side of the Red Sox?s infield. Thus, the safe bet is to expect somewhere in the middle.

Middlebrooks is going to hit for power as long as he?s in the lineup. It?s just a matter of whether he?s a 30-40-homer threat with a poor average and poor on-base percentage — in the mold of Mark Trumbo or Adam Dunn — or whether he can take the next step by improving his all-around game.

A season in which Middlebrooks hits 25-30 homers, bats .260-270 and drives in 80-100 runs would be a step in the right direction for the young infielder. But don?t be shocked if he instead lands on one of the two opposite ends of the spectrum.

Three factors this season will determine the Red Sox?s future at third base:

1) Middlebrooks? production
2) Cecchini?s development in the minors
3) Bogaerts? development at shortstop, and whether the Red Sox decide he?s ultimately better equipped for third base

The best-case scenario, obviously, would be for Middlebrooks to have a good year. That not only would paint a clearer picture of his true potential, but it also would reestablish his trade value in case the Red Sox decide to be aggressive next offseason.

Holt, Snyder and McCoy are veteran minor league infield options who could see time in the majors this season based on circumstance.

Cecchini, who turns 23 in April, was a star in the minors last season, hitting .322 with seven homers, 61 RBIs, 23 stolen bases and a .443 on-base percentage in 129 games split between High-A Salem and Double-A Portland. It?ll be interesting to see if he enjoys an uptick in power this season, but regardless, he?s working his way toward a major league call-up. Cecchini was placed on the Red Sox?s 40-man roster this offseason.

Devers, who could begin the year in the Gulf Coast League, won?t turn 18 until October, so he still has plenty of developing to do. Reports indicate that he has grown since being signed in July, though, and it?s possible that he could become a prospect to really keep an eye on over the next couple of years. 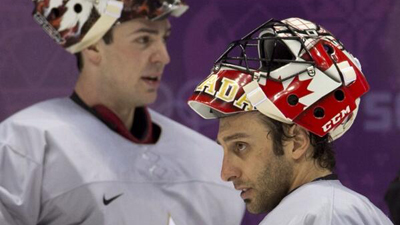 Roberto Luongo, Carey Price Both Starting For Canada In Preliminary Round