BOSTON — Florida Panthers goalie Tim Thomas has always had an interesting sense of humor, and that was on display again Tuesday night after his team’s 4-1 loss to the Bruins.

The loss came hours after the Panthers acquired goaltender Roberto Luongo from the Vancouver Canucks. The addition of Luongo is certainly an interesting one, especially given the history between Thomas and Luongo, which dates back to the 2011 Stanley Cup Final.

That hotly contested seven-game series featured something of a war of words between Thomas and Luongo that culminated with Luongo wondering why Thomas wasn’t “pumping his tires.” When discussing the trade on Tuesday night, Thomas delivered a fantastic line.

“It looked like (Florida genera manager Dale Tallon) went kicking some tires and found one that needed to be pumped,” Thomas joked. “It’ll be interesting. I don’t know how things are going to work out assuming I stay in Florida, it will be interesting. I’m looking forward to it. It’s going to be fun.”

Thomas also said that there aren’t any real hard feelings between he and Luongo.

“I don’t think it will be anything really. I wasn’t an enemy of him even then. I was so focused on doing my job. That’s how I was looking at it. We’re both pros and we’ve both been in the league a long time.”

Hear all of what Thomas had to say in the video below. 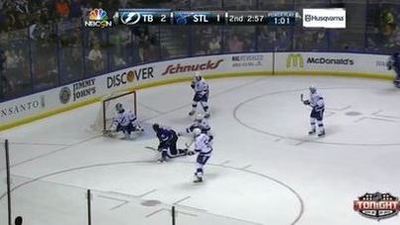