Columbus Blue Jackets winger Nathan Horton has made NHL history by becoming the first player to score a goal in a game he didn’t attend.

Horton, who’s dealing with a lower body injury, isn’t in the lineup for Wednesday night’s game between the Blue Jackets and Stars, which originally was played March 10 but then was postponed by the league when Dallas forward Rich Peverley had a cardiac event during the first period.

Horton, a former Boston Bruin, scored the only goal of that March 10 game before it was ended, but his tally will stand. This makes him the second player to ever record a point without actually playing (Scottie Upshall in 2006 is the other).

Even though play was halted midway through the first period on March 10, Wednesday’s game will start from the beginning, but Horton’s goal will give Columbus a 1-0 lead right off the bat.

UPDATE: The Blue Jackets won 3-1 to clinch their second playoff berth in franchise history. Although Horton might not be ready for Game 1. 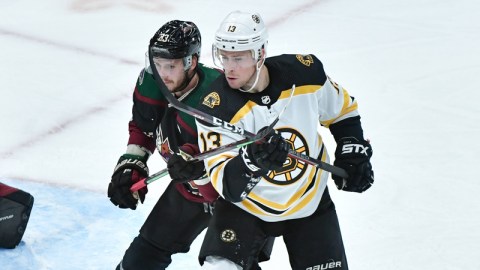