Ninkovich gave a glimpse into the real Belichick on Monday to Sirius XM NFL Radio co-hosts Bruce Murray and Rich Gannon. Ninkovich said his head coach is funny and open with players when they have questions — so, much different than how Belichick treats the media.

“The perception of Bill, they don’t really see Bill outside of his interviews,” Ninkovich told Sirius XM NFL Radio. “He’s a funny guy, he has a great sense of humor and he’s the best football coach ever for a reason. He knows what he’s talking about. He knows how to get the best and the most out of each individual person. So the way he speaks, you definitely listen to the things that he says. You try to write down and absorb as much as you can. He has a ton of knowledge of the game. Walking around the locker room, walking around the facility, he’ll talk to you. He’s the best football coach I’ve been around. There is a definitely difference in the perception of what he is from the media versus what he really is.

“He’s always available if you need to speak to him. That’s another thing he always says, ‘just come to me’ and he’ll tell you it like it is. He won’t sugarcoat anything for you. That’s what you want — honest answers. As a football player, that’s a great thing, to be able to go to your head coach and be able to ask him a question and have him give you a straight-up answer. A lot of people just see an interview, some media guy asking him a dumb question and he likes to give it back to those guys especially.”

Of course, Belichick has had some lighter moments with the media — especially in the past year. 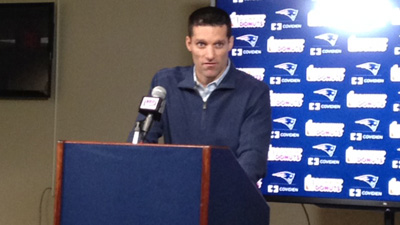