The New England Revolution’s woes continued Wednesday night when they fell to the Los Angeles Galaxy by a score of 5-1.

Robbie Keane scored two goals and set up two more, as the Galaxy consigned the Revs to their sixth straight defeat in Major League Soccer play.

Keane opened the scoring in the 10th minute with a blistering shot from outside the Revolution penalty area.

The teams each were reduced to 10 men later in the first half half. Revolution defender-turned-midfielder A.J. Soares was dismissed for a foul on Juninho in the 28th minute, and L.A. Galaxy defender Dan Gargan was sent off in the 36th minute when he fouled Teal Bunbury, as the Revolution forward was bearing down on goal.

Lee Nguyen converted the ensuing penalty kick in the 38th minute. The goal was Nguyen’s sixth of the season.

The Galaxy made it a rout late in the second half. Stefan Ishizaki beat Shuttleworth with a deflected free kick in the 75th minute, and Keane made it 5-1 when he rounded Shuttleworth and put the ball in the open goal in the 78th minute.

The Revolution’s record fell to 7-9-2 (23 points). The Revs now sit fourth in the MLS Eastern Conference.

The Revs will look to bounce back on Saturday when they visit FC Dallas. The game kicks off at 9 p.m. ET. 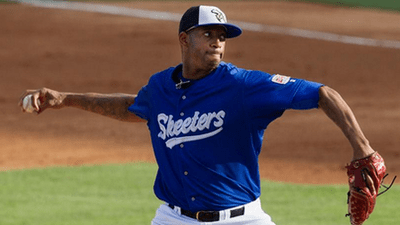 Tracy McGrady Retires From Baseball After Recording First, Only Strikeout