NORTON, Mass. — Russell Henley doesn’t get into contention as much as he’d like, though he’s tough to beat when he’s anywhere near the lead.

Rory McIlroy seems to be there all the time.

They were among a host of contenders Sunday at the Deutsche Bank Championship, setting up the second consecutive week in the FedEx Cup playoffs that the final round resembles more like a free-for-all.

The difference at TPC Boston is the presence of McIlroy so high on the leaderboard.

Henley ran off five birdies in a seven-hole stretch around the turn on his way to a 6-under-par 65, giving him a one-shot lead over Billy Horschel going into a Labor Day finish loaded with possibilities.

Ten players were separated by four shots. Six of them already have won on the PGA Tour this season.

And one of them — McIlroy — has won the biggest events.

McIlroy was dialed in with his swing and shot a 7-under 64 to pull within two shots of the lead.

“I’ve been in this position quite a lot recently,” McIlroy said. “So I know how it’s going to feel tomorrow.”

McIlroy won the British Open, a World Golf Championship and the PGA Championship to assert himself at No. 1 in the world. He is coming off a pedestrian week at The Barclays — at least by his standards — where he started with a 74 and could never catch up. So a round like 64 didn’t surprise him.

“It feels normal,” McIlroy said. “It feels like it’s what I’m supposed to do. It’s my job to go out there and shoot good scores. I’m not getting too excited about it. I’ve got a lot of work to do tomorrow if I want to win this tournament.” 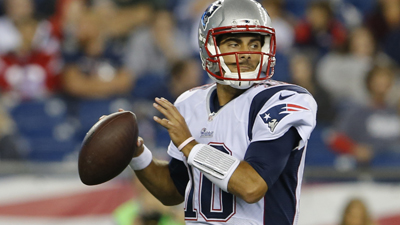 Vote: Are You Comfortable With Jimmy Garoppolo As Tom Brady’s Backup?