The best way to sum up why Rajon Rondo was simultaneously such a unique and polarizing player in Boston was this: He could make unselfishness seem like a selfish act.

Rarely has a point guard piled up such massive assist totals while allegedly caring only about himself. Few are the professional athletes who can be accused of dividing a locker room while insisting so strongly upon letting their actions speak louder than words. Unusual is the star who wants the ball in the clutch when almost everyone in the building knows he probably won’t make the big shot.

Rondo has never fit into a basketball prototype, yet that was why he fit so well on the Celtics — who have the most championships in NBA history precisely because they embraced the unconventional.

Listing Celtics greats is like walking through basketball’s evolution as a sport. Bill Sharman perfected the jump shot when set shots were still common. Bill Russell took the game airborne, basically invented the blocked shot and forced the folks who governed the game to literally change the rules.

Dave Cowens won the Most Valuable Player award as a 6-foot-9 center. Larry Bird overcame an athleticism deficit by becoming a master of angles and creases nobody else saw. Paul Pierce was a do-it-all small forward before the arrival of LeBron James, when (supposedly) the best wing players in the game were one-dimensional scoring machines.

It’s hard to argue with any of those players’ styles 17 championships later, and Rondo was a fitting link from the old era to whatever is next. The Celtics have always done it their own way, convention be damned. In that sense, Rondo fit here perfectly.

— It’s so easy to label a bad offensive team like the New York Knicks as a me-first squad. When Carmelo Anthony or Tim Hardaway Jr. come down the floor and fire up a long jumper without appearing to consider running a play, it’s not difficult to see how New York gets that reputation.

Watching the Knicks more extensively, though, I don’t get the sense they’re selfish. They are ninth in the league in assists, after all. In fact, the herky-jerky offense doesn’t appear to be a case of a bunch of players unwilling to pass, but rather a bunch of players unsure if they should pass. They look uncomfortable with the offense, perhaps trying a little too rigidly to work within the scheme.

Phoenix Suns guard Eric Bledsoe got two easy steals last weekend by merely taking advantage of a triangle offense standard in which the point guard dribbles up and passes to the wing. Bledsoe simply jumped the pass by Jose Calderon and — Boom! — fast break. Predictability, not hero-ball, is to blame there.

— I hate sleeved jerseys as a rule, but I don’t hate the Orlando Magic’s gray get-ups. That’s possibly because sleeves are such an impractical uniform feature for serious basketball playing, and I don’t really consider the Magic to be a serious basketball franchsie.

(As compliments go, that one was actually sort of mean, wasn’t it? #SorryNotSorry) — Darrell Arthur of the Denver Nuggets was rightfully pilloried after he shoved Cleveland Cavaliers guard Dion Waiters on a dunk attempt in November. Waiters went sprawling and landed hard, but was thankfully OK, for the most part.

Arthur got an early ticket to the showers, loads of castigation on Twitter and a one-game suspension.

Then Milwaukee Bucks jumping bean Larry Sanders goes and does this to Nic Batum and, well, it seemed like there should be more indignation:

In both cases, a defenseless, airborne player is about to bring the noise, and a completely selfish act by a defensive player turns a highlight play into one that could alter a career — or a life. Sanders was suspended but the social media outrage seemed muted. Credit Larry Brown Sports for being consistent and calling both plays what they were: dirty. 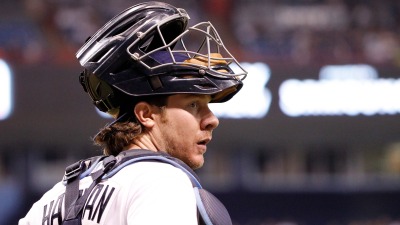