NHL Playoff Predictions 2016: Picks, Analysis For Every Round 2 Series - NESN.com Skip to content

The first round of the 2016 Stanley Cup playoffs provided plenty of surprises.

Arguably the three best teams in the Western Conference — the defending champion Chicago Blackhawks, the Los Angeles Kings and the Anaheim Ducks — all were eliminated. That created an exciting Round 2 featuring several teams that either haven’t been to the Stanley Cup Final in a long time or have never been there at all.

Here are our second-round predictions:

This is going to be a phenomenal series. Just the matchup of Alex Ovechkin and Sidney Crosby is good enough, but you also have the best team in the league from the regular season in the Presidents’ Trophy-winning Capitals facing the hottest team in the league since Christmas in the Penguins, who just dominated the New York Rangers in Round 1.

The Capitals, overall, are a better team. They have more depth offensively, better special teams (No. 3 power play and No. 1 penalty kill), better coaching and were more impressive at driving possession during 5-on-5 play in Round 1 with a 54.3 score-adjusted Corsi For percentage compared to Pittsburgh’s 47.7 percent.

Goaltending also will be a huge factor, which is why Braden Holtby should be the difference for Washington in this series. He’s a remarkable playoff goaltender, as his stats in the tweet below show. The Vezina Trophy finalist also posted a .968 save percentage with two shutouts and no games with more than two goals allowed in Round 1 against the Philadelphia Flyers.

No goalie in the past 34 years has a better career playoff Save Percentage than the #Caps Braden Holtby pic.twitter.com/gxpjmHhyjx

The Capitals finally will advance to the conference finals for the first time in the Ovechkin era (2005-06 to present).

Not posting my Round 2 predictions until tomorrow morning, but since NYI-TBL starts tonight, I'll take NYI in 6.

The Lightning could overcome the loss of injured No. 1 center Steven Stamkos and injured No. 2 defenseman Anton Stralman against an inferior Detroit Red Wings team in Round 1, but it’ll be very difficult to survive without them against a more talented, deeper and hungrier Islanders squad.

The Lightning aren’t likely to score a ton of goals against Islanders goalie Thomas Greiss, who owns a .944 save percentage through seven playoff games. This means Lightning netminder Ben Bishop will need to play at a very high level and avoid any more performance like Game 1, when he allowed four goals and was pulled in the second period.

Lastly, the Isles have the best player in the series: captain and No. 1 center John Tavares. He tallied nine points (five goals, four assists) in Round 1, then scored a goal and added an assist in Wednesday night’s Game 1 win. Tavares will lead New York to the conference finals for the first time since 1992-93.

WESTERN CONFERENCE
(C2) St. Louis Blues defeat (C1) Dallas Stars in five games
The loss of elite scorer Tyler Seguin for at least Game 1 (and probably longer) is a huge blow for the Stars against a Blues team that plays excellent defense and is receiving quality goaltending from Brian Elliott.

Jim Nill on Tyler Seguin: ?He can?t skate yet…He?s day to day, and once he gets on the ice, it?s probably four to five days from there.?

The Stars could have a lot of trouble keeping the Blues from scoring at a high rate. Dallas gave up four or more goals three times to a depleted Wild team in Round 1 that ranked 18th in goals scored during the regular season and didn’t have its top two forwards (Zach Parise and Thomas Vanek) for all six first-round games. The Stars also posted a lackluster .906 save percentage during 5-on-5 play in Round 1, compared to St. Louis’ .950 at 5-on-5 against the high-powered Chicago Blackhawks.

The Blues showed a new level of mental toughness and character in beating the defending champion Blackhawks in the first round. It’s hard to imagine them losing to an inferior Stars team that’s missing its second-best player.

San Jose has so much depth — 10 different players scored in its five-game series against the Kings. The Sharks also boast an impressive top six featuring Hart Trophy candidate Joe Thornton and a blue line with likely Norris Trophy finalist Brent Burns (eight points in Round 1) and the underrated Marc-Edouard Vlasic.

That’s a lot of offensive firepower for the Predators to stop. In fairness, Nashville has one of the better blue lines in the league and protects the slot as well as any team. That said, Preds goalie Pekka Rinne was below average at times in Round 1.

Rinne has the 2nd lowest HD SV% of any goalie left in the playoffs. Niemi is the only worse off – and he won't be starting.

Unless Rinne plays far above this level in Round 2, it’s difficult to pick the Predators to win this series.

The Sharks are a veteran team with a Stanley Cup window that’s not far from being closed. They realize this is their best chance to win a title, especially with juggernauts Chicago, L.A. and Anaheim already eliminated. 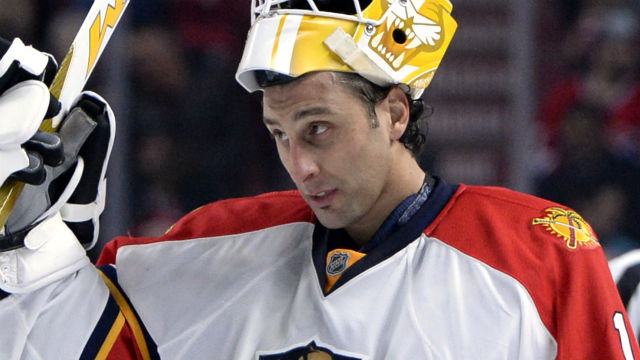