Final, Patriots 23-21: Jimmy Garoppolo takes a knee, and that will do it.

Stephen Gostkowski’s 32-yard field goal with 3:44 remaining proves to be the difference as the Patriots emerge victorious in Garoppolo’s first start. Next up: a date with the Miami Dolphins next Sunday afternoon at Gillette Stadium.

Fourth quarter, 0:36, Patriots 23-21: A 47-yard field-goal attempt by Chandler Catanzaro sails wide left. The Patriots will win this one.

Fourth quarter, 2:00, Patriots 23-21: We’ve reached the two-minute warning, and the Cardinals are driving. A third-down reception by Fitzgerald gave Arizona a first-and-10 on New England’s 34.

Fourth quarter, 3:44, Patriots 23-21: Stephen Gostkowski caps a six-minute-plus drive with a go-ahead 32-yard field goal. Danny Amendola came up big for New England on that possession with three catches for 47 yards, and the Patriots were successful on three third-down conversions.

Fourth quarter, 9:46, Cardinals 21-20: The Cardinals have their first lead of the game, thanks to a sensational run by David Johnson and an equally impressive catch by Larry Fitzgerald.

Johnson’s 45-yard rumble, during which he broke no fewer than four tackles and stiff-armed both Devin McCourty and Duron Harmon, gave Arizona the ball at New England’s 12-yard line, and Carson Palmer found Fitzgerald in the corner of the end zone four plays later.

Fourth quarter, 12:35, Patriots 20-14: It’s still a one-score game after Stephen Gostkowski hit a 53-yard field goal. Every Patriots offensive drive is a grueling march down the field as Garoppolo is forced to dink and dunk with pressure coming when he tries to hold the ball longer. He’s 19-of-26 passing for 202 yards with one touchdown so far.

Third quarter, 4:29, Patriots 17-14: The Cardinals quickly responded with a 1-yard touchdown run by David Johnson. Both Cardinals touchdowns have been the result of Patriots turnovers.

Patriots coach Bill Belichick was furious after the touchdown, as his team wasn’t given enough time to substitute on defense.

Third quarter, 6:20, Patriots 17-7: LeGarrette Blount fumbled after being halted at the line, and the Cardinals recovered the ball at the Patriots’ 33-yard line.

Third quarter, 7:01, Patriots 17-7: The Patriots’ defense continues to impress. They forced a punt with two straight pass breakups — one from Butler and one from Ryan.

Third quarter, 10:00, Patriots 17-7: The Patriots apparently are done messing around.

Garoppolo started a 75-yard scoring drive with a 3-yard pass to himself (deflected by a Cardinals defender). The drive ended with an 8-yard touchdown by LeGarrette Blount.

Rookie Malcolm Mitchell had an impressive 28-yard contested catch. Blount is having a solid game with 14 carries for 58 yards and the score.

End half, Patriots 10-7: Jamie Collins finished out the half with a sack.

Second quarter, 0:22, Patriots 10-7: The Patriots also went three and out, assisted by a tripping penalty by David Andrews and a hold by Shaq Mason. Rookie Ted Karras also has a penalty.

Second quarter, 1:24, Patriots 10-7: The Cardinals went three and out with three incompletions. The Patriots have the ball on their own 31-yard line.

Second quarter, 1:50, Patriots 10-7: The Patriots didn’t get anywhere on what could be their last drive of the first half. Brandon Bolden carried the ball for 4 yards, followed by a 2-yard loss by Bolden and a James White reception that resulted in another 2-yard loss.

Second quarter, 4:06, Patriots 10-7: The Cardinals were able to take advantage of Jimmy Garoppolo’s mistake by driving 54 yards down the field for a touchdown, as Carson Palmer hit Larry Fitzgerald for a 3-yard score on a pick play. Michael Floyd ran Malcolm Butler into Logan Ryan, which allowed Fitzgerald to run free.

Second quarter, 10:26, Patriots 10-0: Jimmy Garoppolo fumbled as he was being sacked by Markus Golden. Chandler Jones picked up the loose ball, did a choreographed dance and was penalized 15 yards. Cardinals ball.

Second quarter, 12:22, Patriots 10-0: The Patriots gave up two first downs but otherwise held steady, as Chris Long finished the drive with his first sack as a Patriot. Rookie Vincent Valentine recorded the first sack of his NFL career earlier in the series.

First quarter, 1:00, Patriots 10-0: The Patriots have a two-score lead after Stephen Gostkowski hit a 47-yard field goal. That’s a great start for Jimmy G and the Patriots.

Garoppolo now is 7-of-11 passing for 106 yards and one touchdown.

The Patriots allowed one first down on the Cardinals’ opening drive and zero yards on two carries. Carson Palmer went 2-of-3 passing for 24 yards.

First quarter, 15:00: The Cardinals won the toss and chose to receive. The Patriots will kick off.

A few notes:
— The Patriots will roll with just two tight ends.
— Wide receiver Malcolm Mitchell will make his NFL debut.
— Pass rushers Trey Flowers and Shea McClellin both are active after being tested pregame.

It appears Shea McClellin and Trey Flowers will be game-time decisions.

5:49 p.m.: The New York Jets and Buffalo Bills already lost, and the Miami Dolphins are trailing the Seattle Seahawks, so it’s already a good day for the Patriots.

Some Patriots already have taken the field for warmups.

— Patriots by the numbers

Stay here for updates and analysis leading up to and throughout the game, which airs on NBC. 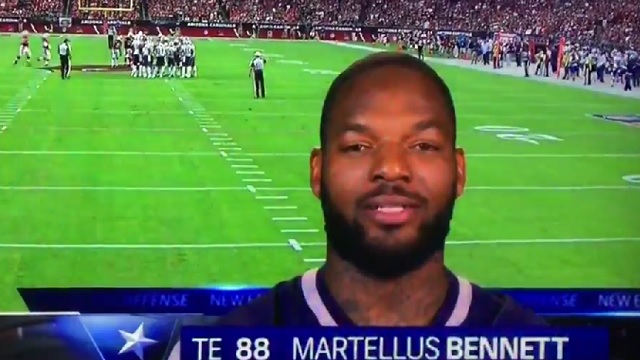 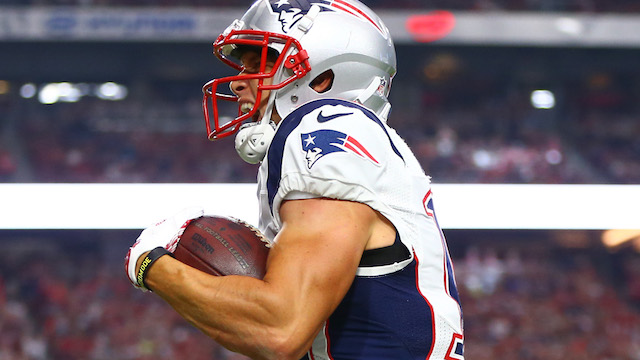