Jaylen Brown has been the Boston Celtics’ best player through four games of the 2017-18 NBA season.

You might not have expected that coming into the campaign, especially after the additions of All-Star veterans Kyrie Irving and Gordon Hayward, but it’s hard to argue the results so far.

Brown scored a game-high 23 points on his 21st birthday Tuesday night as the Celtics crushed the New York Knicks 110-89 at TD Garden.

Brown has scored 18 or more points in three of four games this season, and he looks much more polished offensively. He’s attacking the paint with effective drives to the basket, using new moves like the baseline spin, and shooting a better percentage from 3-point range. His touch at the basket finishing shots also has been softer this year.

The most impressive part of Brown’s offensive output against the Knicks was his efficiency. He shot 9-for-16 overall and 3-for-6 from beyond the arc. His shot mechanics look a lot more refined, which probably is a result of hard work over the summer.

Sure, the Knicks are awful and it’s not tough to stuff the stat sheet against them. But in fairness to Brown, the fundamental improvement and high-IQ plays are impressive, and that stuff will translate to similar performances versus better teams. He did score a career-high 25 points on opening night against the LeBron James-led Cleveland Cavaliers.

The Celtics have to be very impressed with Brown’s development in the early going this season, and they need every bit of it with Hayward unlikely to return from injury before next season.

Here are some other notes from Celtics-Knicks:

Jaylen Brown and Jayson Tatum just became the first #Celtics duo ever to score 20-plus points at 21 years old or younger in same game in team history, per Elias.

Tatum’s scoring came on 9-for-16 shooting, including a 4-for-6 mark from 3-point range. He also added four rebounds and four steals. The former Duke star has scored 14 or more points in three of four games.

— Terry Rozier has been a bright spot off the bench this season. He scored eight points with six assists and six rebounds Tuesday night. Before the game, Celtics coach Brad Stevens praised the third-year point guard.

High compliment from Brad Stevens on Terry Rozier: "Terry has been as consistent as anybody we've had going back to the preseason."

— Knicks center Kristaps Porzingis entered Tuesday averaging 32 points per game, but he was shut down by the C’s, who threw Al Horford, Brown and others at the Latvian superstar. Porzingis scored just 12 points on 3-for-14 shooting.

Kristaps Porzingis shot 0/10 on shots contested by Al Horford and Aron Baynes tonight, and they were all tightly contested.

Marcus Smart (ankle) out vs. Knicks. Brad Stevens says plan is to travel Smart on upcoming road trip with hopes he can return then. 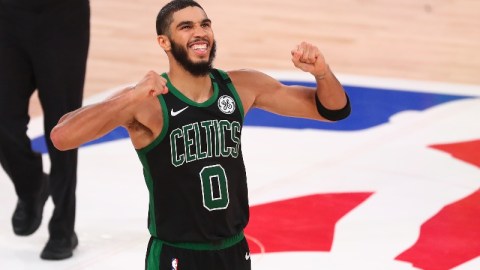 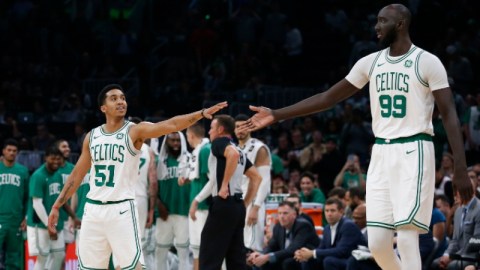