The New England Patriots got sacks from Dont’a Hightower and Kyle Van Noy on the New York Jets’ final possession to foil their hosts’ late comeback bid. The Patriots trailed 14-0 early but rallied to score 24 of the final 27 points to hold off their longtime AFC East rivals.

The Patriots benefited from a controversial call late in the game. Austin Seferian-Jenkins appeared to score a touchdown that would have cut New England’s lead to three, but officials determined he actually had fumbled the ball and then carried it into the end zone.

The ruling wiped away the score and gave the ball back to the Patriots. The Jets managed just a field goal the rest of the way.

With the victory, Tom Brady set a new NFL record for regular-season wins by a quarterback with 187, passing Peyton Manning and Brett Favre.

Next up for the Patriots is a Super Bowl LI rematch against the Atlanta Falcons next Sunday night at Gillette Stadium.

Fourth quarter, 3:40, Patriots 24-17: The Jets responded with a field goal to pull within seven points of the Patriots.

New England’s defense allowed a 44-yard pass to a wide-open Jermaine Kearse — continuing a trend that has plagued the unit throughout the season — but stiffened up in the red zone.

Fourth quarter, 6:32, Patriots 24-14: Austin Seferian-Jenkins came within inches of scoring his second touchdown of the afternoon.

The Jets tight end caught a pass from Josh McCown near the goal line and tried to muscle his way into the end zone while Duron Harmon and Malcolm Butler attempted to bring him down. Initially, it looked like he did so successfully.

Upon video review, however, the officials determined Seferian-Jenkins had lost control of the ball, then carried it over the goal line and out of bounds. The result: Turnover, touchback, Patriots ball.

You be the judge. pic.twitter.com/dAqVruzo0E

Needless to say, that was a huge call for New England, which proceeded to go three-and-out on the ensuing drive.

Fourth quarter, 14:10, Patriots 24-14: The Patriots had a chance to extend their lead to 14 points, but they were unable to convert in the red zone.

An offensive pass interference penalty on Brandin Cooks pushed them from the 6-yard line back to the 16, and the drive stalled from there, forcing New England to settle for a 28-yard field goal by Stephen Gostkowski.

Third quarter, 11:22, Patriots 21-14: A nearly seven-minute drive for the Jets ended with the ball in Devin McCourty’s hands.

New York needed 12 plays to move the ball 52 yards, the last of which resulted in a Josh McCown interception on fourth-and-1.

The Patriots will take over on their own 28.

New England opened the second half by putting together a 75-yard scoring drive capped off by Rob Gronkowski’s second touchdown catch of the afternoon.

Gronkowski caught a pass over Jamal Adams on a crossing pattern and easily outmaneuvered Marcus Maye in the open field for a 33-yard score.

For the 2nd time today…

Halftime, 14-14: The Patriots’ ensuing drive ended in a missed 43-yard field goal by Stephen Gostkowski, but Malcolm Butler put an end to the Jets’ next possession by picking off Josh McCown.

Tom Brady took advantage of the extra opportunity, connecting with Brandin Cooks for 42 yards down to the Jets’ 2-yard line.

Somehow, this game is tied as we head into halftime.

More good news for the Pats: Chris Hogan is back on the field. Looks like he’s OK.

In the span of two plays, Chris Hogan was injured on a hospital pass from Tom Brady that fell incomplete, and Brady threw his second interception of the season, overthrowing Phillip Dorsett on a deep ball.

Buster Skrine, who dropped a would-be interception on the Patriots’ last possession, came up with the pick.

Second quarter, 3:17, Jets 14-7: The Patriots now have a bit of momentum after forcing another Jets three-and-out. They’ll have more than three minutes to put another score on the board before halftime.

Rob Gronkowski was instrumental during the drive, picking up 25 yards on a highlight-reel catch up the right seam and also drawing a pass interference penalty on rookie Jamal Adams in the end zone.

The call was questionable, but it gave the Patriots the ball at New York’s 1-yard line, and Dion Lewis plunged his way into the end zone one play later.

It was telling that Lewis, not Mike Gillislee, got the call in the goal-line situation. Gillislee didn’t see the field during the drive after fumbling on the previous possession.

Lewis and Gillislee both have run well today, averaging 6.5 yards per carry on 12 rushing attempts.

McCourty was penalized one play earlier for an illegal hit on Robby Anderson downfield, but the officials picked up the flag after determining he had hit Anderson in the chest, not the head.

Second quarter, 11:15, Jets 14-0: The Patriots were unable to pick up a first down on their latest possession, with Morris Claiborne breaking up a pass intended for Brandin Cooks on third down to force another Ryan Allen punt.

Tom Brady has 33 passing yards so far. Josh McCown has 149 with two touchdowns.

After taking possession following Mike Gillislee’s fumble, Josh McCown completed passes of 15, 16 and 31 yards to lead the Jets on another touchdown drive.

The 16-yarder went to Jermaine Kearse, who beat Johnson Bademosi for a first down on third-and-5, and the 31-yarder was a touchdown pass to Jeremy Kerley, who outran Malcolm Butler and walked untouched into the end zone.

First quarter, 0:51, Jets 7-0: Mike Gillislee entered the game for the Patriots’ second possession and ran well, picking up 23 yards on his first four carries. Unfortunately for Gillislee and the Patriots, his fourth rush ended in a fumble that the Jets recovered.

It was the first fumble of the season by a Patriots running back.

First quarter, 4:04, Jets 7-0: That was a much better showing by the Patriots’ defense. The Jets gained 7 yards on three plays and were forced to punt.

First quarter, 5:31, Jets 7-0: The Patriots came up empty on their first drive of the afternoon, picking up two first downs before being forced to punt the ball away.

Dion Lewis got the start at running back and immediately ran for 9 yards on the Patriots’ first offensive play. Lewis entered the game as New England’s leader in yards per carry.

Brandin Cooks later had a bad drop on second-and-6, but Tom Brady hit Chris Hogan for 19 yards on the next play to move the chains. Drops have been an issue this season for the talented Patriots wideout.

Brady couldn’t connect with Rob Gronkowski on the next third down to end the drive.

Thanks to a strong punt by Ryan Allen, the Jets will begin their second possession on their own 4-yard line.

First quarter, 9:08, Jets 7-0: This could be a long day for the Patriots’ shorthanded defense.

Josh McCown and the Jets marched 88 yards down the field for a touchdown on the game’s opening drive. New York converted four third downs on the drive: third-and-10, third-and-8, third-and-6 and third-and-goal from the 1, with McCown finding Austin Seferian-Jenkins in the end zone after the tight end had evaded linebacker Elandon Roberts.

Johnson Bademosi did indeed get the start at cornerback over Jonathan Jones. Safety Jordan Richards also was in the starting lineup.

Jones was in coverage on a 30-yard completion to Jeremy Kerley that brought the Jets down to the Patriots’ 1-yard line.

First quarter, 15:00, 0-0: The Patriots won the opening coin toss and chose to defer. It’ll be Jets ball to start as we get underway in East Rutherford, N.J.

11:47 a.m.: We’ll see if this sticks in the game, but cornerback Johnson Bademosi was running with the starting defense in warmups, lining up opposite Malcolm Butler.

Bademosi hasn’t played a single defensive snap this season, but he played 283 for the Detroit Lions in 2016.

11:47 a.m.: Miss NESN.com’s live Patriots-Jets pregame show? No worries. You can watch the full show in the player below.

11:30 a.m.: There will be no reunion today for former Jets linebacker David Harris.

Harris is inactive today as the Patriots take on his old team. It’ll be the third straight DNP for the 33-year-old, who was a healthy scratch against the Carolina Panthers and dressed but did not play against the Tampa Bay Buccaneers.

With Eric Rowe and Stephon Gilmore both out, Malcolm Butler, Jonathan Jones and Johnson Bademosi will be the Patriots’ only active cornerbacks. Bademosi has yet to play a defensive snap this season.

Defensive tackle Alan Branch is active after being a healthy scratch last week.

9:20 a.m.: ESPN’s Mike Reiss shared some discouraging news this morning regarding the health of wide receiver Malcolm Mitchell, who currently is on injured reserve.

Mitchell, who is sidelined with a knee injury, is eligible to resume practicing this week, but Reiss reported he is “not close” to being ready to do so.

Linebacker Shea McClellin and defensive tackle Vincent Valentine, meanwhile, have more positive injury outlooks, per Reiss. All three currently are on IR, and only two are allowed to return to the active roster this season.

This isn't the best news re: Malcolm Mitchell's chances of coming off IR soon, via @MikeReiss pic.twitter.com/Ass1vwmwe6

Players who begin the season on IR must sit out at least the first eight games. Since the Patriots have a bye in Week 9, the earliest we could see Mitchell, McClellin or Valentine back on the field would be Week 10.

In other news, rookie Harvey Langi’s wife, Cassidy, shared an update on her and Langi’s condition this morning. The two were involved in a car accident Friday night and reportedly suffered serious, but not life-threatening injuries.

Harvey Langi and ?a passenger?…. that?s me ???Thanks to everyone for the love and support! We are both focused on recovering from this. https://t.co/MMWEdTr3V2

The Patriots and Jets both sit at 3-2 entering the divisional clash — tied for first place in the AFC East — and New England will be playing without running back Rex Burkhead, cornerback Eric Rowe and, most alarmingly, starting corner Stephon Gilmore, who on Saturday was ruled out with a concussion after initially being removed from the injury report Friday.

Gilmore had been dealing with a minor ankle injury. The details of his concussion remain murky, though ESPN’s Josina Anderson reported he was experiencing headaches following last Thursday’s win over the Tampa Bay Buccaneers.

The Patriots also will be without rookie hybrid linebacker Harvey Langi, who was involved in a serious car accident Friday night. Langi, who has been active for just one game this season, sustained a back injury in the crash.

The Jets enter the weekend on a three-game winning streak after beginning the season 0-2. They always seem to play the Patriots close, with seven of the teams’ last eight meetings being decided by seven or fewer points.

Kickoff at MetLife Stadium is set for 1 p.m. ET. Be sure to check back here throughout the morning for full pregame coverage. 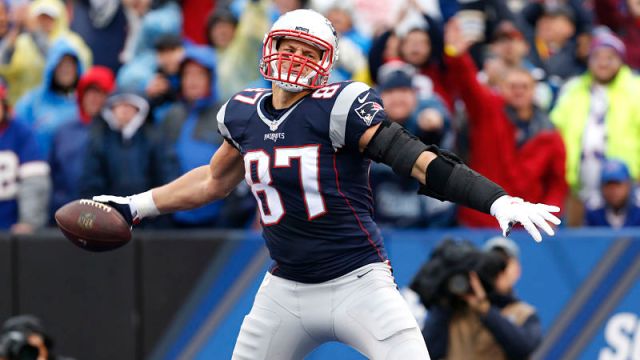 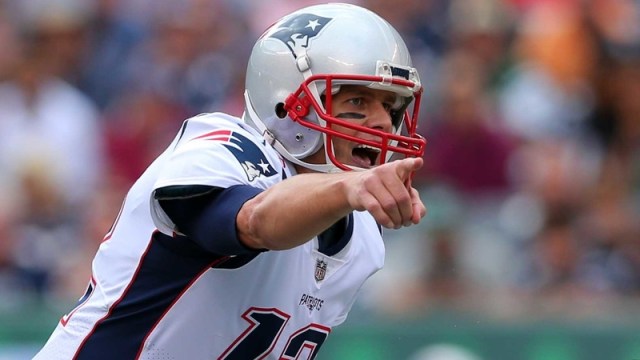 Tom Brady Was NOT Happy About Patriots’ Rough First Half Vs. Jets