The Boston Bruins’ attention now is turned to the Stanley Cup Playoffs.

Boston went 1-3-0 in the final week to finish second in the Eastern Conference behind the Tampa Bay Lightning. And while there’s plenty to look forward to in the postseason, there still is some excitement left over from the regular season.

Goal 1: David Backes’ Goal Vs. Panthers
Backes scored the Bruins’ first goal in Sunday’s loss to the Florida Panthers thanks to his strength up front. Keven Miller threw a puck on net from the point and Backes snuck it around goalie James Reimer as he fell to the ice.

Goal 2: Ryan Donato Scores Vs. Panthers
Donato scored an impressive goal in front of the net in Thursday’s loss to Florida. He collected a Torey Krug shot from the point and showed great composure as he danced around goalie Roberto Luongo before burying the puck.

Goal 3: David Pastrnak Scores On Power Play
Pastrnak had a nifty tally in the final period of the Bruins’ regular season finale. With Boston on the power play, he ripped a shot past Reimer after receiving a nice cross-ice feed from Patrice Bergeron. 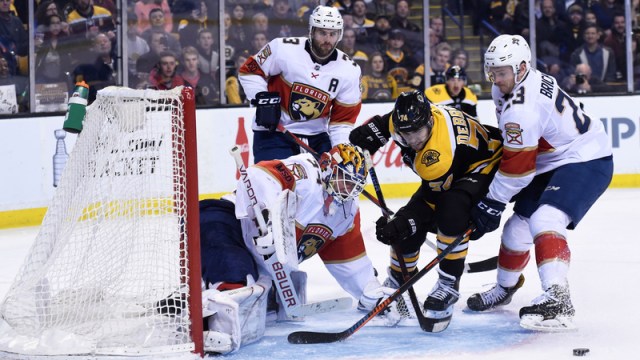 Bruins Notes: B’s Stumble Into Playoffs With 4-2 Loss To Panthers