The Boston Celtics head coach had been nothing short of brilliant so far this season, navigating his young team through a rash of injuries and into a second-round NBA playoff matchup with the Philadelphia 76ers.

Philadelphia has been on a ridiculous run throughout the last third of the NBA season, winning 20 of its last 22 games, in large part because of their ability to attack slow rotations either off a Ben Simmons penetration or a double team on a Joel Embiid post-up.

But Stevens and the Celtics didn’t give them that opportunity in Game 1 — a 117-101 Boston win at TD Garden.

The Celtics elected not to double Embiid in the post, instead deciding to leave the job to Aron Baynes and Al Horford, giving Boston’s perimeter players the ability to get physical with the 76ers’ shooters and stop Simmons from dicing up their interior defense.

“I think that you’re just going to have to balance that as the series goes on,” Stevens said. “(Embiid) can get 31 in isolation, but if you’re doubling him an everything else, are you giving up 33 because you’re leaving shooters? It’s a fine line, it’s a balancing act. That’s what makes it really hard to play these guys because they are so talented and they find the hot guy.”

Boston’s strategy worked in Game 1. The 76ers shot an abysmal 5-for-26 (19.2 percent) from the 3-point line and committed 12 turnovers while assisting on just 22 of its 35 made field goals. Boston’s perimeter players were able to stay in front of Simmons for the most part, as the star rookie only dished out six dimes while turning the ball over seven times in the contest.

While Stevens wasn’t overly impressed with Boston’s Game 1 defense, the decision not to double off shooters flustered the 76ers for most of the night, causing the ball to stick on one side of the court and bogging down their offensive attack for key stretches.

— Terry Rozier, Jayson Tatum and Horford combined for 83 points in Game 1. The most that Paul Pierce, Kevin Garnett and Ray Allen ever combined for in the playoffs or regular season was 79.

— Tatum became the second rookie in the last 20 seasons to have three straight playoff games with 20 or more points. He trails only Utah Jazz guard Donovan Mitchell who has seven straight.

— Boston outscored the 76ers by 36 points from the 3-point line in Game 1. The Celtics had eight players hit at least one shot from beyond the arc Monday night. 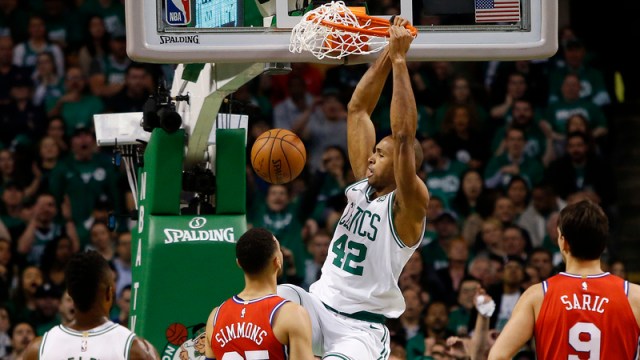 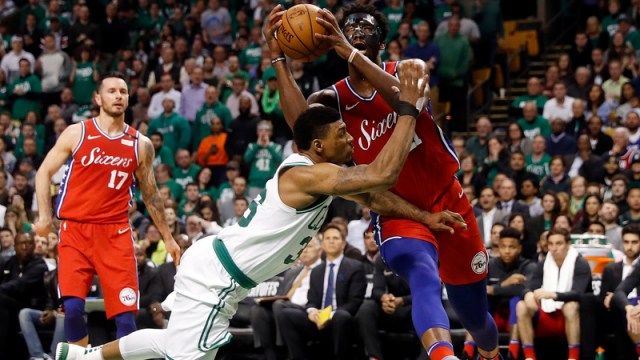