Final, Patriots 24-12: For the 10th consecutive year, the New England Patriots are champions of the AFC East.

The Patriots extended their unbelievable streak of division dominance by easily dispatching the Buffalo Bills 24-12 on Sunday at Gillette Stadium.

The win featured one of the most prolific rushing performances of the Bill Belichick era. The Patriots racked up 273 rushing yards, with Sony Michel leading the way with 116 yards on 18 carries and Cordarrelle Patterson adding 66 yards on four jet sweeps before leaving the game with a knee injury.

The Patriots record for rushing yards since Belichick took over in 2000 is 277, set in a blowout win over the Oakland Raiders in 2008.

Strangely, the victory also featured one of the worst statistical performances of quarterback Tom Brady’s career. He completed 13 of 24 passes for just 126 yards and one touchdown with two interceptions before being lifted for backup Brian Hoyer with more than six minutes remaining and the game in hand.

The Patriots will host the New York Jets next Sunday in their regular-season finale.

Surprisingly, the Patriots have opted to give Tom Brady the rest of the afternoon off. Brian Hoyer now is in at quarterback.

This certainly was not the most desirable showing by Brady, who completed 13 of 24 passes for 126 yards and one touchdown with two interceptions.

Fourth quarter, 7:44, Patriots 24-6: Yet another successful jet sweep — this one a 17-yarder by Phillip Dorsett — brought the Patriots inside the Bills’ 5-yard line.

James White was stuffed on three straight handoffs, and Stephen Gostkowski trotted out to boot a 24-yard field goal that added a bit of extra insurance to New England’s lead.

The Patriots have 271 rushing yards today, the second-highest single-game total of the Bill Belichick era.

Fourth quarter, 12:00, Patriots 21-6: The Patriots picked up one first down and drained four-and-a-half minutes off the clock before punting. Matthew Slater downed the punt at Buffalo’s 8-yard line.

Bills tight end Jason Croom scampered 24 yards to the Patriots’ 6 after catching a short pass from Josh Allen, but as he fought for extra yardage, Jason McCourty ripped the ball from his hands. Defensive tackle Malcom Brown pounced on it, giving the Patriots the ball deep in their own territory.

Third quarter, 5:05, Patriots 21-6: After big gains by Sony Michel (17-yard run) and Rex Burkhead (25-yard reception), the Patriots kept the offense on the field on fourth-and-4 and wound up with their third touchdown of the game.

Julian Edelman caught a quick slant from Tom Brady and managed to keep his body off the ground while being tackled by two Bills defenders. He rolled off both and raced the final 10 yards to the end zone to give the Patriots a commanding 15-point lead.

He wasn't down!@Edelman11 keeps on running for the @Patriots TD! #GoPats

Cordarrelle Patterson was not on the field during the drive nor the kickoff that preceded it (Michel handled returning duties). He’s questionable to return with a knee injury.

Third quarter, 10:06, Patriots 14-6: The Bills swiftly moved down the field thanks to a defensive pass interference penalty on Jonathan Jones and a 19-yard completion to tight end Jason Croom, but they again had to settle for three after Josh Allen fired three straight incompletions into the end zone.

Jones might have gotten away with another PI on one of those misfires.

Third quarter, 11:16, Patriots 14-3: A holding call on Julian Edelman — his second penalty today and fourth in the last two games — wiped out what would have been a Patriots first down. They punted two plays later after Sony Michel was stopped 2 yards short on third-and-6.

Third quarter, 13:29, Patriots 14-3: Tom Brady’s first pass of the second half bounced off Rob Gronkowski’s hands and into Jordan Poyer’s for his second interception of the game.

Buffalo couldn’t do much after the takeaway, gaining just 7 yards on three plays before settling for a 35-yard field goal by Stephen Hauschka.

Halftime, Patriots 14-0: The Patriots punted on their final drive of the first half, and the Bills took a knee to run out the clock.

That was an excellent first half for New England from a rushing perspective, as they racked up a whopping 179 yards on the ground while holding the Bills to just 37. The Patriots have only surpassed 180 rushing yards in a game once this season.

Cordarrelle Patterson is leading the charge with 66 rushing yards on four carries — all jet sweeps.

The passing game, on the other hand, could use some work. Tom Brady has completed 7 of 13 passes for just 40 yards and no touchdowns with one interception.

Second quarter, 2:23, Patriots 14-0: The Bills’ longest drive of the afternoon stalled at the Patriots’ 25-yard line when a Josh Allen pass to Robert Foster fell incomplete on fourth-and-3.

Trey Flowers left for the locker room midway through the drive but later returned to the sideline. He appears to have suffered a hand/wrist injury.

J.C. Jackson, who’s having a phenomenal rookie season in the Patriots’ secondary, stepped in front of a Josh Allen pass on the first play for his third interception of the season.

Just four plays later, though, Tom Brady threw an interception of his own, with Lorenzo Alexander capitalizing on an apparent miscommunication between Brady and Rex Burkhead.

Offensive coordinator Josh McDaniels said this week White, who’s been relatively quiet of late after a torrid start to the season, needs to be more involved in the offense. That’s his first touchdown since Week 9, snapping a streak of five straight games without one.

Cordarrelle Patterson, who’s sliced up the Bills on jet sweeps today, also ripped off a 15-yard gain earlier in the drive.

Second quarter, 12:19, Patriots 7-0: Pressure off the edge by Jerry Hughes on second down led to Buffalo’s first sack of the game and helped force a Patriots punt.

The Bills went three-and-out on the ensuing series. They have just one first down in five possessions.

First quarter, 0:08, Patriots 7-0: The Patriots continue to have success running the football, but a miscue by Rex Burkhead ended their latest drive.

Burkhead fumbled after a 3-yard gain, and the Bills recovered, giving them possession at the Patriots’ 40-yard line.

Josh Allen managed to pick up Buffalo’s first first down of the game with an 11-yard completion to Robert Foster, but he also airmailed two throws out of bounds, forcing the Bills to settle for a 43-yard field-goal try.

Stephen Hauschka did not have the leg for what should have been an easily makeable kick, doinking it off the crossbar.

First quarter, 7:32, Patriots 7-0: That’s another three-and-out for the Bills, who have yet to pick up a first down in this game.

Robert Foster had a chance for a big play after burning Stephon Gilmore on a vertical route, but he appeared to lose the ball in the sun, resulting in an incompletion.

Ufomba Kamalu, who was promoted from the practice squad this week, dropped LeSean McCoy in the backfield on his first snap as a Patriot.

Josh Allen scrambled on third-and-14 but gained just 6 yards. The Patriots have done a nice job of containing the elusive rookie thus far.

First quarter, 7:32, Patriots 7-0: The Patriots kept the ball on the ground for the entirety of their second drive, and that plan produced the game’s first touchdown.

Josh Allen was able to wriggle free from Trey Flowers to avoid a sack and pick up 5 yards on second-and-10, but his pass to Isaiah McKenzie on the ensuing play bounced off the receiver’s hands, resulting in another three-and-out.

Of note: cornerbacks Keion Crossen and Jonathan Jones both were on the field over Jason McCourty on third down.

Tom Brady targeted Julian Edelman on all three snaps, resulting in a drop, a 7-yard completion and a pass breakup by linebacker Tremaine Edmunds.

Ryan Allen got a nice roll on his punt, pinning the Bills at their own 15-yard line.

First quarter, 13:35, 0-0: The Patriots’ defense opened the game by forcing a quick three-and-out.

Safety Patrick Chung, who hasn’t appeared to be fully healthy in recent weeks, was shaken up again during the drive. We’ll be monitoring that situation throughout the afternoon.

First quarter, 15:00, 0-0: The Patriots won the opening coin toss and chose to defer. Stephen Gostkowski will kick off to get things started here on a clear and cold Foxboro afternoon.

The big defensive tackle is active today for the Patriots, ending a streak of three consecutive healthy scratches. The Patriots surely hope Shelton will help solidify a run defense that struggled mightily in his absence.

Adrian Clayborn is the most surprising name on the inactive list. He’s a healthy scratch for the first time this season.

Clayborn has struggled to contain mobile quarterbacks this season, making him a poor matchup against Josh Allen, who ranks second among QBs in rushing yards.

Defensive lineman Ufomba Kamalu is active after being promoted from the practice squad this week. He took Josh Gordon’s spot on the 53-man roster.

Duke Dawson once again is a healthy scratch. He still has yet to make his regular-season NFL debut. The second-round draft pick discussed his long wait this week in an interview with NESN.com.

10:20 a.m. ET: With just two weeks remaining in the NFL season, the New England Patriots still have yet to clinch the AFC East title. They?ll have a third opportunity to do so this afternoon when the Buffalo Bills visit Gillette Stadium.

The Patriots, who scored a 25-6 road victory over the Bills in Week 8, will be playing this game without wide receiver Josh Gordon, who was suspended indefinitely by the NFL this week. Expect larger workloads for Chris Hogan, Phillip Dorsett and Cordarrelle Patterson as New England looks to fill the void.

The Pats are close to full health for this game, with only special teamer Brandon King (questionable, knee) listed on the injury report.

A win today would give the Patriots their 10th consecutive division title and keep them alive in the race for a first-round playoff bye. They currently sit in third place in the AFC standings at 9-5, one game behind the 10-4 Houston Texans, who visit the Philadelphia Eagles this afternoon

Kickoff is set for 1 p.m. ET. Tune in to the NESN Pregame Chat live at 11 a.m. on NESN.com and NESN?s Facebook page. 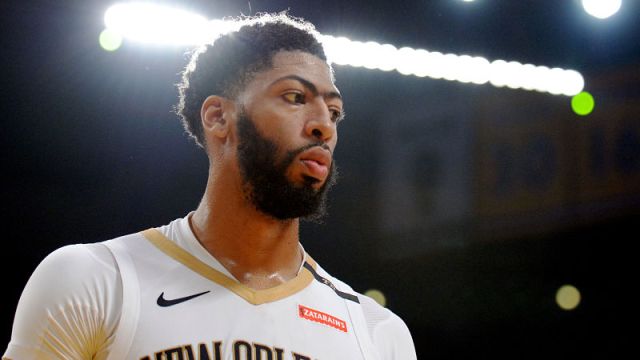 Anthony Davis Rumors: Execs Expect Star To Be Traded To Celtics Or Lakers