Well, things got a little wet, but the Boston Red Sox came away with the win Friday night at Comerica Park.

The Sox and the Detroit Tigers waited out a two-hour, four-minute rain delay before the beginning of the sixth inning as Boston went on to claim a 9-6 victory.

Boston held a 3-1 lead before the delay, with Eduardo Rodriguez going long enough to earn the win before exiting after the rain. The Red Sox offense exploded for 14 hits, including a pair of home runs.

GAME IN A WORD
Delayed.

ON THE BUMP
— Rodriguez kept the Tigers at bay before the rain came in.

Detroit got to the southpaw in the fourth inning, with Brandon Dixon knocking a single and then scoring on a Jeimer Candelario double to left field.

Otherwise, Rodriguez put in another efficient outing, allowing just four hits with a walk and four strikeouts. The delay ended his day after just 76 pitches, but left him eligible to pick up the win.

— Marcus Walden took over after the lengthy delay and allowed the Tigers to claw back.

Detroit tagged Walden for four runs, two earned, in just 1/3 of an inning. He was lifted after two singles and a sacrifice fly (which Jackie Bradley Jr. booted) made it 6-4.

— Ryan Brasier entered with two runners on and one out in the sixth, and allowed John Hicks to lace an RBI-single to make it 6-5.

He remained in the game, tossing a scoreless seventh.

— Matt Barnes struck out two in a spotless eighth.

— Heath Hembree allowed a leadoff home run in the ninth to Hicks, but retired the next three in order to close things out.

IN THE BATTER’S BOX
— Mookie Betts, who has struggled while leading things off the in the first inning this season, laced a double to open the game.

He advanced and scored on back-to-back groundouts from Rafael Devers and Xander Bogaerts.

— Devers continued his monster pace in the third inning.

The third baseman flicked a home run to the opposite field, giving the Red Sox a 3-0 lead.

— The delay did little to dampen the Sox’s bats.

Boston scored three runs right out of the shoot in the sixth thanks to an RBI-double from Bradley. An error from Candelario allowed two more runs to score. That was followed by a Betts sac fly to make it 6-1.

— Bogaerts provided some much-needed relief with a three-run homer in the eighth to blow it back open, 9-5.

— Betts led the way with three hits, while Chrisitan Vazquez, Bradley and Michael Chavis all logged two each. Every Boston starter had a base hit. Bogaerts had four RBIs while Devers had two.

Good news: here?s a picture of the Twitter Intern?s dog.

Feel free to drop pics of your baseball doggos below! pic.twitter.com/ZQzWr9L0ll 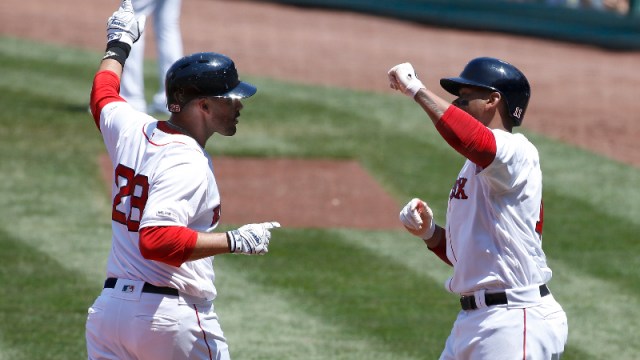 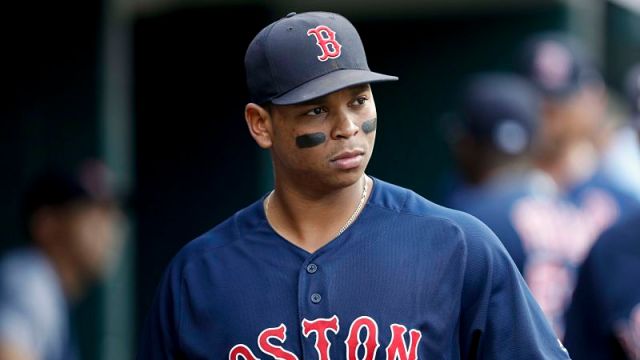