Josh Gordon’s reinstatement Friday injected a shot of adrenaline into a New England Patriots receiving corps that looked to be on life support.

Assuming Gordon can work his way back into game shape by Week 1, he should begin the season as the Patriots’ No. 2 receiver behind Julian Edelman, who’s on the mend from a broken thumb. When the Patriots bring on a third wideout, Edelman would shift into the slot, with Phillip Dorsett, Jakobi Meyers or N’Keal Harry likely filling the other outside spot.

That’s just a tad more formidable than the Dontrelle Inman-Braxton Berrios-Gunner Olszewski trio the Patriots were forced to trot out at joint practice with the Tennessee Titans on Thursday.

Having Gordon back from suspension makes New England’s offense exponentially more dangerous. But it does raise some tough questions that must be answered before cutdown day.

Edelman and Gordon both are roster locks. So is Harry. And after what we’ve seen from Meyers this summer, we’re including the undrafted North Carolina State product in that category, as well.

So, that’s four spots occupied, plus another for special teams stud Matthew Slater. The Patriots haven’t carried more than six receivers on their Week 1 roster since 2008. In that trend continues, two of Dorsett, Braxton Berrios and Maurice Harris likely will be gone at the end of the preseason.

And that’s before factoring in the potential returns of newcomers Demaryius Thomas (Achilles) and Cameron Meredith (knee) from the physically unable to perform list. Meredith seems like a safe bet to start the year on PUP and eye a potential comeback in Week 7, but Thomas has traveled with the team to both sets of joint practices (Detroit and Tennessee) and was seen running full-speed sprints this week.

It wouldn’t be shocking to see the team activate the former Denver Broncos star within the next three weeks, which would throw another wrench into the roster cutdown process.

Who has the edge at this point between Dorsett, Berrios and Harris? It’s hard to say.

Dorsett knows the system and saw consistent first-team reps throughout training camp, but he caught just a shade over half of his targets in 11-on-11 drills (16 of 30) and now is dealing with an apparent thumb/hand injury that knocked him out of practice earlier this week. Harris also is hurting — his a reported lower leg ailment that could sideline him for “a while” — and his star has faded a bit of late after a banner start to camp. Berrios basically has served as an Edelman fill-in this summer, with mixed results.

Given their issues at tight end and Gordon’s unreliable history, there is a chance the Patriots could break with tradition and keep seven receivers, possibly with the intention of cutting one once Ben Watson returns from his suspension in Week 5. Finding playing time for that many wideouts would be tricky, though, making a six-man group the more likely avenue.

Rounding out the group of wideout hopefuls are Inman, Olszewski, Ryan Davis and Damoun Patterson, all of whom looked like long shots even before Gordon’s reinstatement. Those four should see plenty of playing time Saturday night against the Titans. 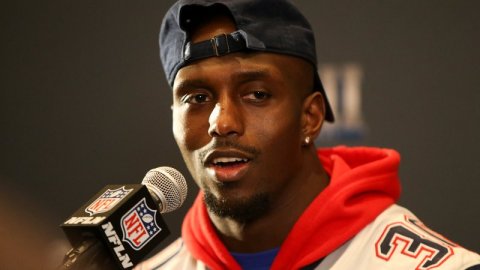