FOXBORO, Mass. — Josh Gordon played his first meaningful football in nearly nine months Sunday night, then shed some light on the difficulties he endured during his abbreviated 2018 season.

Speaking with reporters for the first time since his latest indefinite suspension was lifted last month, Gordon opened up about his initial transition to the New England Patriots last fall and his current well-being entering the 2019 season.

“For me, initially it was a culture shock,” Gordon admitted after the Patriots’ season-opening 33-3 rout of the Pittsburgh Steelers at Gillette Stadium. “It was definitely different. I think as I grew in this environment and got to observe other young men move and organize and act professionally, expectations were high. It wasn’t anything more than what I think they knew that they could do what was being asked of them.

“I was like, ‘All right, this is the way it’s done here.’ I could either get with it or look for a transition somewhere else. It’s tough, but if this is what you want to do, I think this is the best place to be.”

Before being traded to the Patriots, Gordon spent six tumultuous years with the Cleveland Browns. Due to various team and NFL suspensions related to substance abuse, he played just 10 games from 2014 to 2017, including zero in 2015 or 2016. Another suspension cut short Gordon’s first Patriots campaign after 11 games, raising doubts over whether he’ll remain available for New England on a weekly basis this season.

Gordon, though, said he’s in a good place mentally and embracing the Patriots’ culture.

“I’m doing very well,” Gordon said. “I’m extremely filled with gratitude every day, just enjoying myself. Coming inside this building, being with this family-oriented type of environment, and just doing what I love to do. There’s nothing better than this, honestly. It’s great.”

Gordon’s suspension prevented him from participating in spring practice or training camp with the Patriots. Since his reinstatement Aug. 16, he’s worked daily with strength and conditioning coach Moses Cabrera to bring himself back to peak fitness.

“He’s been a real good resource for me,” Gordon said of Cabrera. “Coming back, getting into shape, making sure I’m on top of things and giving my best effort. We talk about it every day, what we want to put out there at practice. It feels good to know that we put together somewhat of a finished product this first week and were able to maintain. Now we want to be able to build upon it. So continued hard work, that’s what we’re all about. That’s what I’m going to continue to try and do.”

Gordon, whose unofficial return to the field came in the Patriots’ preseason finale last week, caught just three passes on four targets against the Steelers but provided two of the night’s biggest highlights. He scored New England’s first touchdown 10 minutes in, catching a shallow cross from quarterback Tom Brady and galloping 20 yards to paydirt, running straight through an attempted Joe Haden tackle in the process.

“We have spent a lot of time together,” Gordon said when asked about rebuilding his chemistry with Brady. “I think over the course of time, talking together, working together after practice, in between practice — yeah, I get the feel for what he likes and I try to find my way there as best I can. I think it’ll get better. It’s the first game, so we’re building.”

Ten minutes into the second half, Gordon found himself matched up against a linebacker in the tight slot. He easily won that matchup, tearing down the middle of the field and hauling in a 42-yard bomb from Brady between three Steelers defenders.

Safety Terrell Edmunds delivered a booming hit as the ball arrived, but Gordon held on.

TB12 just showing off his arm ?

If Gordon can maintain this level of play over the coming months, New England’s receiving corps could border on unstoppable. Julian Edelman (six catches, 83 yards) and Phillip Dorsett (four catches, 95 yards, two touchdowns) also posted impressive numbers against Pittsburgh, and superstar Antonio Brown is set to join the fray this week. Demaryius Thomas also could return in Week 2 after missing Sunday’s opener with a hamstring injury.

“I think Josh is a great player, and he was last year for us,” Brady said. “It?s great to have him out there. He?s a dynamic player, and every game that we play together, there?s just more things that come up, there?s more trust that?s built. I?ll keep finding a way to get him the ball.” 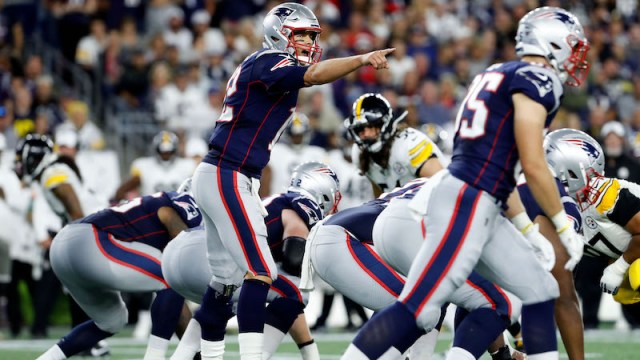 Do Patriots Even Need Antonio Brown? No, But They’re Getting Him Anyway 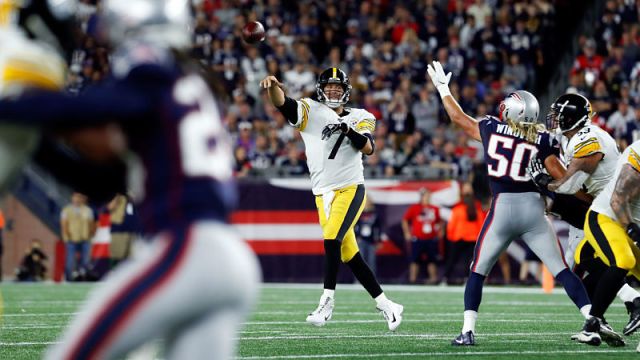 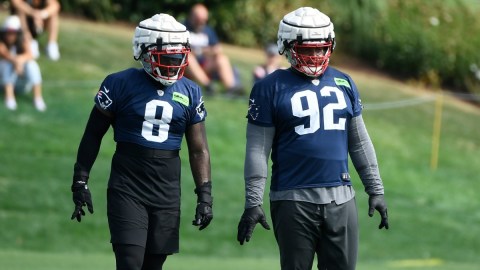