FOXBORO, Mass. — Look at the numbers, and it would be natural to wonder why New England Patriots linebacker Jamie Collins isn’t rushing the passer more this season.

Collins leads the Patriots with six sacks through eight games. That’s despite the fact he’s dropping back in coverage far more often than he’s actually rushing the passer. Collins has been on the field for 262 snaps against the pass this season, per Pro Football Focus. Collins has dropped back in coverage on 63.4 percent of those snaps and rushed 36.4 percent of the time.

Collins ranks first among all qualified defenders in PFF’s pass-rush productivity metric this season with his five sacks and two half-sacks, one QB hit and 10 hurries in 96 pass-rush snaps. He also has the highest sack rate (7.3 percent) among all defenders with at least 25 reps rushing the passer.

So, why isn’t Collins rushing more?

He’s their best, most athletic coverage linebacker, they simply don’t need him to rush the passer more, and he might be more effective the less he does it. The Patriots play the Ravens on Sunday night, and Baltimore’s head coach, John Harbaugh, acknowledged Collins might be more dangerous when opposing offenses don’t know when he’s coming.

“That, to me, is one of the strengths of their defense — you don?t know who is doing what,” Harbaugh said Wednesday in a conference call. “They?re changing it up within the scheme. I think they play a very solid, sound, almost a throwback type of a defense — very physical, fundamentally solid in every single way, well-coached, smart guys. And then they mix it up, you know, who?s dropping, who?s coming, who?s containing, what coverage they?re going to be in. They?re going to blitz everybody or drop eight, you just never can be sure.”

Collins and fellow linebackers Dont’a Hightower and Kyle Van Noy are all adept at dropping and rushing. Van Noy rushes the most, Hightower is fairly balanced, and Collins drops into coverage more frequently. But they’re relatively interchangeable in their roles on and off the line of scrimmage.

And Collins’ role in coverage has allowed him to come away with three interceptions and a touchdown so far this season.

“We bring those guys, whether you’re talking about Kyle or Hightower or (Ja’Whaun) Bentley, we bring those guys from all over the place,” inside linebackers coach Jerod Mayo said Monday. “Jamie, for the most part, has been off the ball, but he’s also one of those guys you can put on the end of the line of scrimmage and rush the passer. I’m not sure what offenses are talking about as far as who’s coming and who’s not, but we try to make it as difficult as possible, and we’re fortunate to have a lot of versatile linebackers who are able to line up in different places and make it tough on them.”

Collins should be viewed as a candidate for NFL Defensive Player of the Year in his return to the Patriots after two-and-a-half years with the Cleveland Browns. He also has three tackles for loss and has forced two fumbles and a pass breakup in eight games.

Clearly, what the Patriots are doing with Collins is working. 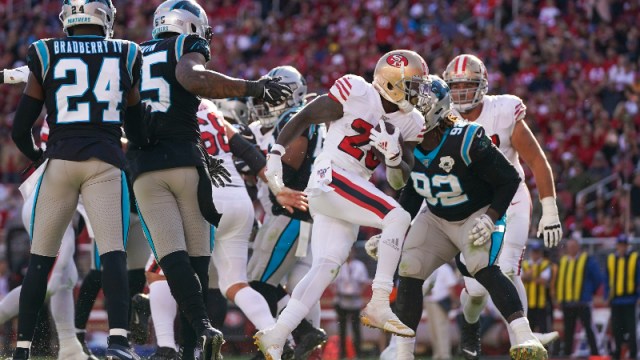 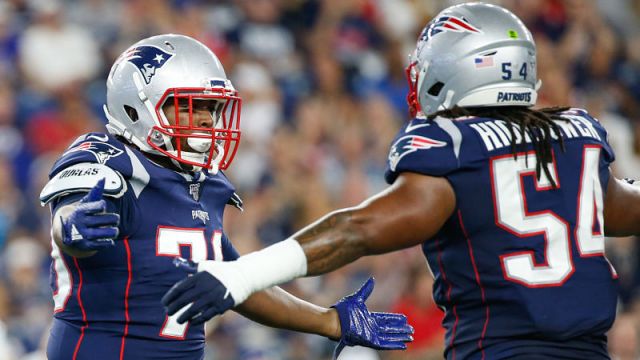