BOSTON — What a night for David Pastrnak.

The Boston Bruins right winger tallied his fourth hat trick of the season in Wednesday night’s 4-1 victory over the Canadiens at TD Garden — his second of the season against Montreal. Pastrnak now leads the league with 41 goals, passing the Toronto Maple Leafs’ Auston Matthews and the Washington Capitals’ Alexander Ovechkin for the top spot.

Pastrnak’s second and third goals of the night came in the second period. He is the first Bruins player to score 40 goals in a season since Glen Murray did so in 2002-03.

It took Pastrnak 58 games to reach the 40-goal mark, the fewest number of games required to accomplish the feat since Cam Neely in 1993-94.

Neely's campaign also stands as the fewest games by any player in franchise history to reach the benchmark. #NHLStats pic.twitter.com/9MjCSNrIZp

Wednesday’s hat trick was the ninth of his young career, joining Ovechkin as the second active player in league history to earn nine three-goal nights before turning 24. Wayne Gretzky still holds the record with 36.

Only one player in @NHLBruins history has netted more in a single season. #NHLStats https://t.co/gqRyqx3FXK pic.twitter.com/w4EIyDpJXV

(You can watch all three goals here.)

This is the first time Pastrnak has reached 40 goals in his career, too. That said, he remained fairly humble about his milestone after the game.

“Obviously, I’m happy for that. It’s something that I haven’t accomplished yet in my career, so (it’s) obviously exciting,” Pastrnak said. “But I couldn’t have done it without my teammates and big thanks to them.”

Head coach Bruce Cassidy had plenty of praise for the youngster’s growth.

“It’s a career-high, right? So, that means he’s moving forward,” Cassidy said. “That’s what you want, your younger players to keep taking steps. I like the play made with the goalie out at the end, too. … There’s a lot of other growth in his game that I like. Obviously, we want to see him continue to score, that helps us win games. So, now he’s at (41 goals) and who knows what next, right? There’s still a lot of hockey left.”

Brad Marchand, who earned an assist on Pastrnak’s first goal of the night, is proud of how much his linemate has improved, and can’t wait to see what’s next.

“It’s kind of scary to kind of look at where his ceiling might be,” Marchand said. “He continues to push it and continues to get better and so it’s fun to watch him. It’s fun to play with him. You always have to be on your toes because you never know what he’s going to do. I don’t even think he knows what he’s doing half the time. So it make it very dangerous for other teams and other players when he’s so unpredictable. But yeah, he continues to grow so I’m excited to see where he’s going to be in a couple of years.”

“I think the way he started this year, we all thought he’d be in that area anyway, challenging for 50 (goals). So, that will be the next conversation, I assume. And good for him. He deserves it. He’s done a lot of things well. He goes to the right spots. He’s worked on his shot, worked on his strength to handle pucks, so let’s see him keep going.”

Here are some more notes from Wednesday’s Bruins-Canadiens game:

— The spotlight was largely on Pastrnak, but Marchand made a little history of his own, too.

Marchand is the 10th player in Bruins history to record 70-plus points in four-plus seasons. Pastrnak reached the same milestone earlier this season.

Brad Marchand joined @pastrnak96 in collecting 70 points in each of the last four seasons.

It marked the 10th time a @NHLBruins has recorded 70+ points in four or more consecutive campaigns. #NHLStats pic.twitter.com/dpynnaiyjF

— Perhaps the biggest unsung hero of the night was Tuukka Rask.

The Bruins netminder turned away 28 of the 29 shots he faced, standing on his head at times to keep Boston in the game.

— Sean Kuraly exited the game in the second period after colliding with Charlie McAvoy. No update on his condition was provided after the game.

— The Bruins have two days to regroup before taking on the Detroit Red Wings (again) on Saturday at TD Garden. Puck drop is slated for 1 p.m. ET. 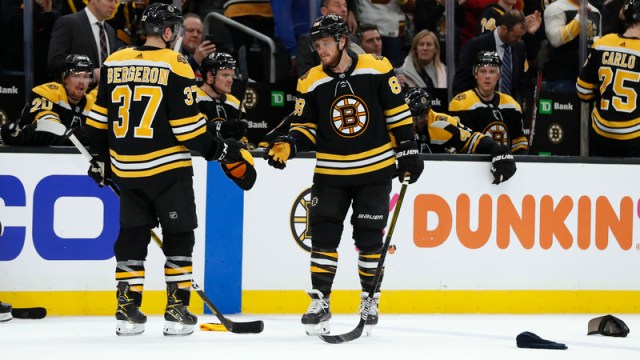 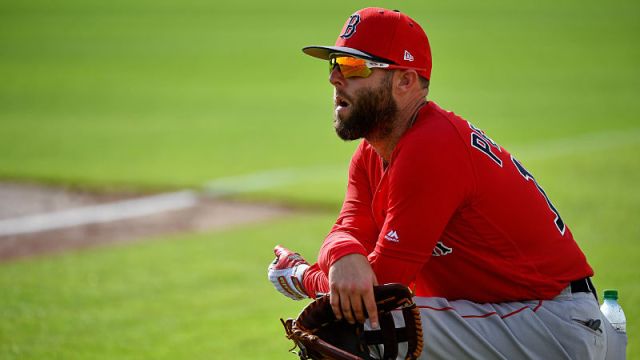