FOXBORO, Mass. — The New England Patriots practiced in front of the media for the final time in 2020 on Sunday.

For the remainder of the season, reporters will be permitted to watch just a few short minutes of each Patriots practice, with the bulk of the team’s preparation occurring behind closed doors.

Here’s everything we saw at Sunday’s training camp finale:

Winovich has missed the last two practices. Allen has yet practice in front of reporters this summer, though he was present at Friday’s in-stadium “game simulation.” Jackson, who’s fighting for a roster spot in the Patriots’ deepest position group, also observed Friday’s session. Miller remains on the physically unable to perform list and has yet to make his Patriots practice debut.

Edelman, McCourty and Phillips were present at practice but did not take part in positional or team drills.

Meyers wore a red non-contact jersey but otherwise appeared to be a full participant, catching three passes on four targets in 11-on-11s with one drop. He’s been slowed by a shoulder injury for much of camp.

Barnett was seen with a large ice pack on his left knee and did not participate in the remainder of practice.

Newton, the clear favorite for the Patriots’ starting QB job, again took the lion’s share of reps in team drills. One of his incompletions was the Meyers drop.

Practice concluded with two two-minute drills. Newton and Hoyer handled these while Stidham observed. Newton went 4-for-6 with one pass breakup during his. Hoyer went 1-for-3, failing to connect on deep balls to Gunner Olszewski (with J.C. Jackson providing tight coverage) and Devin Asiasi (with Kyle Dugger blanketing him).

Newton was far from flawless during his first Patriots training camp and could experience some growing pains as he continues to adjust to Josh McDaniels’ offense, but the 2015 NFL MVP appears to have scored a decisive victory in the team’s most important roster battle.

Folk was markedly better than his rookie competitor, Justin Rohrwasser, on Sunday, continuing a trend that’s persisted since the veteran re-signed with New England last weekend.

Folk converted four of his five kicks during team drills, hitting from extra point distance, 43 yards, 48 yards and 48 yards before clanging a 49-yard attempt off the right goal post.

Rohrwasser was an ugly 2-for-6, with three straight wide-left misses from 48 yards — one of which might have been partially blocked — and a 54-yard bid that fell short.

Rohrwasser on Friday missed three of his five field-goal attempts in a game-type setting, including one as time expired in the first half and another in the final seconds of regulation.

The fifth-round draft pick is just 4-for-11 over his last two practices and 12-for-22 over the last five sessions. Folk is 18-for-21 during that span, according to stats compiled by Mark Daniels of the Providence Journal.

Cutting a fifth-rounder before his rookie season certainly wouldn’t be ideal, but Rohrwasser simply does not look ready for the NFL stage.

The Patriots could look to stash him on the practice squad or injured reserve to give him more time to develop, but unless something changes drastically between now and the Sept. 5 cutdown deadline, Folk should be the one who makes the 53-man roster.

— N’Keal Harry provided the most impressive offensive play, lunging from the ground to catch a pass during Newton’s two-minute drill after losing his footing. The streaky second-year wideout also dropped what would have been a highlight-reel catch over J.C. Jackson.

— Rookie offensive lineman Mike Onwenu might have more versatility than he showed at Michigan, where he almost exclusively played right guard. He said in a post-practice video conference that he played tackle in high school.

The fifth-round draft pick’s stock seems to be on the rise.

— Williams intercepted a tipped Hoyer pass despite wearing large pads on his hands (the kind a boxing trainer would wear). Dugger also wore these pads, which could be a method of curbing defensive holding.

Dugger was a full participant for the second straight practice after being limited in the previous six.

Williams nearly broke up another pass on a short throw to Jake Burt, but the rookie tight end was able to corral it and make a juggling catch.

— Newton again brought his renowned energy to practice, launching into an elaborate dance routine during warmups.

Busting a move in stretching lines has become a daily tradition for the new Patriots QB.

— Newly signed wide receiver Andre Baccellia made his Patriots practice debut, wearing the same No. 67 that Will Hastings sported before his release last Friday.

— Outside linebacker Derek Rivers had to run a lap for jumping offside during a punt drill.

— The Patriots have until 4 p.m. ET on Saturday to trim their roster from 80 players to 53. Their regular-season opener is set for Sunday, Sept. 13 against the Miami Dolphins at Gillette Stadium. 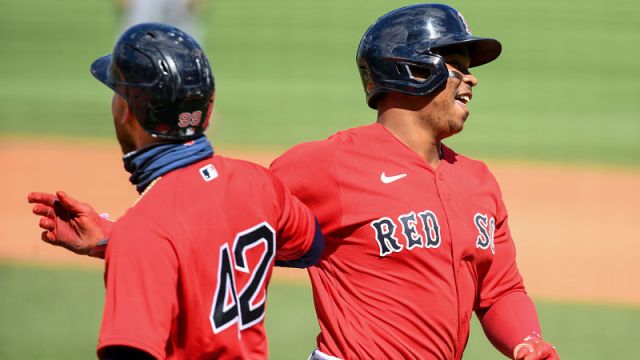 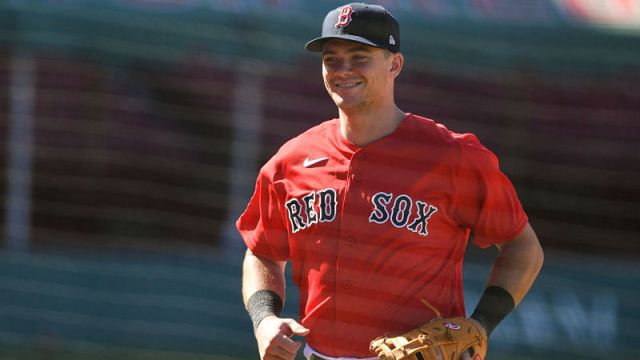