Here are some betting picks for this weekend’s UFC 252 at the UFC APEX facility in Las Vegas.

Heavyweights: Daniel Cormier -110 vs. Stipe Miocic -110
The UFC heavyweight title trilogy fight between Stipe Miocic and Daniel Cormier will be decided in a small cage. Each man knows he is capable of stopping the other with strikes, but we still don’t know if either veteran wrestler can own rounds via ground position.

The cage and the crowdless arena are suddenly part of the storyline. If a wrestler really wants to grind out an opponent, being able to push to the fence in a smaller cage and potentially spend long minutes with no booing from an impatient audience certainly helps.

Miocic apparently lobbied for a full-size cage but to no avail. He is a boxer-wrestler hybrid who utilizes a long-range attack while standing. Body kicks set up his victory in their last meeting, despite Cormier being the busier striker overall.

Should the two spend time trading leather on the feet, certain factors favor each. Miocic is more accurate and rangy, but he also shows a more lenient defense that has led to being dropped at a slightly higher pace than Cormier. Cormier’s stats arguably are depressed by long fights against the elusive Jon Jones.

On the ground, it’s again a close matchup, but the wrestling pedigree of Cormier is elite, and when on the ground he has been flawlessly in control. He’s also more likely than Miocic to advance position once there — and even attempt submissions. (Miocic has zero submission attempts to date.) Cormier averages 1.7 minutes of control time per takedown landed, which is usually enough to win a round when he can get to the mat.

Cormier will be chasing Miocic and the taller man’s 73 percent takedown defense. But notably, Miocic has only a 40 percent takedown defense when he’s in the clinch. That could be the opening that sways an otherwise close matchup. Cormier could use the confines of a small cage to keep the fight where he wants it and where Miocic is less able to do damage.

We’re left with two of the best heavyweights ever trying to decide their final pecking order and, for Cormier, to decide his legacy for the sport in his last appearance.

Lean is for Cormier, but not if his price rises above -150.

Lightweights: Vinc Pichel -125 vs. Jim Miller +105
Submission ace Miller has taken on the who’s who of the lightweight division for over a decade. Having overcome health problems in the recent past, it seems he’s still capable of performing at a high level, even as he approaches his 37th birthday later this month.

Certain matchups would be a red flag for a submission fighter at this age, but he’s facing an older yet less experienced opponent in Pichel, who has not consistently demonstrated his hands and is clearly the lesser grappler. At nearly pick-’em odds, or even at plus money, Miller has a good shot at a submission finish.

Pick is Miller, with a small play on the submission finish prop.

Light-heavyweights: Magomed Ankalaev -295 vs. Ion Cutelaba +250
Just before the global pandemic paused the UFC, Ankalaev and Cutelaba faced off in a strange contest that controversially ended in the first round. Ankalaev landed strikes, but Cutelaba appeared to be playing possum and faking a helpless reaction. Regardless of validity, the referee stopped the fight, and it was immediately rebooked.

The numbers liked Ankalaev then, and nothing has changed, except his price increased. Ankalaev is the superior technical striker, with better accuracy and avoidance, while Cutelaba is far more aggressive but sloppy in style. Both men have solid takedown defenses but are hesitant in offensive wrestling, so this should mostly take place on the feet, where Ankalaev will want to play off of Cutelaba’s aggression.

Pick is Ankalaev. We have light-heavyweights who prefer to stand and trade, now in a small cage, so add Fight Does Not Go the Distance for parlays, regardless of who wins.

Bantamweights: Sean O’Malley -305 vs. Marlon Vera +255
The hype behind O’Malley continues to climb after back-to-back stoppage victories. He enters his fifth UFC fight as a heavy betting favorite over an established veteran. But as impressive and expected as O’Malley’s last knockout was, the ingredients for the same type of performance are not present this time.

Vera is a dual-threat fighter, unlikely to make submission mistakes, and he’s still young and durable. This fight could be wild, but O’Malley’s price has risen too far to justify. It’s now a dog-or-pass matchup, and Vera could end up as the biggest dog on the card.

It’s a pass. Instead take the Over 2.5 rounds at plus money. 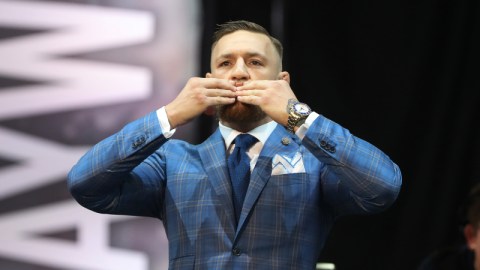