White said his mother, Lisa, continues to progress in her recovery after she was seriously injured in a car crash last month. White’s father, Tyrone, was killed in the crash.

“Everybody (back home) in Florida’s doing better,” White said in a video conference. “My mom’s doing better, as well. She’s progressing physically. Obviously, a lot going on in her mind and things of that nature, but she’s continued to progress. I’m just trying to be there for her.

“Obviously, it’s a tough situation. She’s just trying to wrap her mind around everything still. Kind of a lot going on, but I’m just trying to be there for her and my family, as well.”

White took a leave of absence from the Patriots following the crash, returning home to South Florida to be with family. He missed two games before rejoining the team for its Week 4 loss to the Kansas City Chiefs.

Since arriving back in New England, he’s stayed in frequent contact with his mother while she recuperates.

“Obviously, I’m kind of far away, but just trying to be in contact with as much family as possible to keep them up to date and just let them know I’m there for them,” he said. ” … Just check in, let her see her grandkids on FaceTime, things of that nature. Just maybe get her mind off things a little bit. Keep it a little bit more normal for her.”

White has played in each of the Patriots’ last three games but was used sparingly in last week’s blowout loss to the San Francisco 49ers, playing just 10 offensive snaps after missing two practices for non-injury-related reasons.

The 28-year-old co-captain was asked whether it’s been difficult for him to remain focused this season.

“It’s still an opportunity that I have to play this game, so I don’t try and take that lightly,” White replied. “There’s plenty of guys that would love to be in my shoes and would love to play in the NFL, so I just try and keep that in the forefront of my mind and make the most of the opportunities that I get and just be a viable option to help my team win football games.

“We have great guys in this locker room. We stick together on and off the football field, so those guys have helped me do this whole thing. I’ve just got to keep pushing forward and do whatever I can to help my team.”

The Patriots are preparing to visit the Buffalo Bills on Sunday. White was a full participant in Wednesday’s practice. 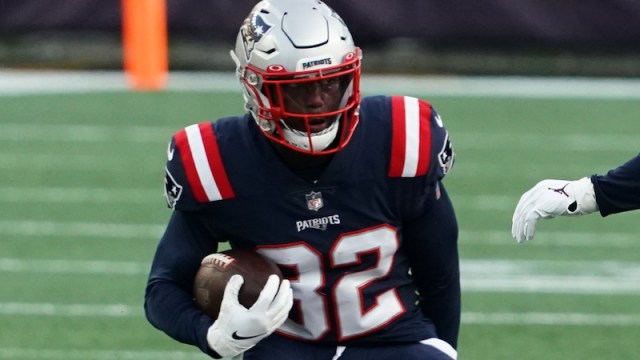