There is a fascinating situation with the Chicago White Sox involving Tony La Russa and a young South Siders roster.

Things got borderline uncomfortable Monday night when White Sox slugger Yermín Mercedes swung at a 3-0 pitch and hit a home run. That it came late in a blowout game against a position pitcher on the mound is the sort of thing frowned upon in some baseball circles.

Like, old baseball circles, the circles to which 76-year-old La Russa very much belongs. Which is why it probably shouldn’t have surprised anyone when La Russa called out his own player for adding to his team’s lead Monday night.

“Big mistake,” La Russa told reporters, per ESPN.com, before Tuesday’s White Sox-Twins game. “The fact that he’s a rookie, and excited, helps explain why he was just clueless. Now he’s got a clue.

“I was upset because that’s not a time to swing 3-0. I knew the Twins knew I was upset. ? He missed a 3-0 take sign. With that kind of lead, that’s just sportsmanship and respect for your opponent.”

He added, per The Athletic: “There will be consequence that he has to endure here within our family. But it won’t happen again because (third base coach Joe McEwing) will be on the lookout, and I will be, too, and we’ll go running in front of the pitcher if we have to.”

Debating the place for sportsmanship as it pertains to one-sided games in professional sports certainly is an interesting conversation.

For someone like Mercedes, who is finally making a big league impact after nearly a decade in the minors, statistical production is the key to financial success. In a vacuum, it’s kind of hard to tell someone to not do things that might get them paid.

Baseball certainly doesn’t operate in a vacuum, though, which is why Tuesday night’s events should come as no surprise. In the top of the seventh, Twins pitcher Tyler Duffey threw a 93 mph fastball behind Mercedes. The umpires got together and ejected Duffey.

Where things got even more complicated, though, was after the game. That’s where La Russa endorsed the Twins’ move of throwing at his own player.

“I don’t have a problem with how the Twins handled that,” La Russa said.

Gotta think the White Sox might have a problem with how La Russa handled that, though. 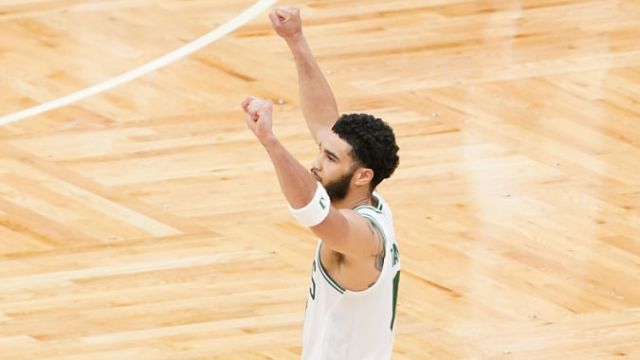 Is Jayson Tatum A Superstar? Celtics Forward Offers His Take After Huge Night