Patriots Mailbag: Which Recent Draft Picks Are On Roster Bubble? Skip to content

New England Patriots training camp is well underway. Have questions? Of course you do.

We’ve got answers in the first Patriots mailbag of the 2021 preseason:

@JasThompson13
How will Uche/Wino playing time be effected by Judon, High and Van Noy. Is Wino’s roster spot secure or could he be traded?
I think Josh Uche has real breakout potential, even if the presence of guys like Matt Judon, Dont’a Hightower and Kyle Van Noy prevent him from becoming a regular starter. He was the Patriots’ best pass rusher in the second half of last season and should be a staple in their third-down sub packages. Judon is very high on the young linebacker, telling reporters Thursday that “Uche’s going to be great.”

Chase Winovich is an interesting case. I expect him to make the roster, but he could have trouble finding playing time on defense despite leading the team in sacks and pressures last year. That’s how much the Patriots’ pass rush has improved since January. It also hasn’t helped that Winovich currently is on the active/physically unable to perform list and has yet to take the field in training camp.

@pats_szn21
If Harry continues to practice well, does he stay on the team, or still get traded?
N’Keal Harry got off to a strong start in camp with two nice touchdown grabs on Day 1, but he was quiet on Day 2, finishing without a catch on two targets in competitive team drills.

Could he make the roster? Sure. But I viewed him as a bubble player even before his agent went public with his comical trade request. The 2019 first-rounder has not come close to meeting expectations since landing in New England two years ago, and I believe the team most likely will end up trading or cutting him by the end of the preseason.

Harry might not be the only one, either. With so much new talent on the roster after New England’s offseason spending spree, we could see a number of recent Patriots draft picks shown the door this summer. Others who could be dealt or released include:

@eryk_white
Does the ball control/run heavy/defensive construction of the team give Mac an edge if they’re even at the end of camp? I like cam but it seems like the offense is built for someone who can make the smart throw on third down
If Cam Newton and Mac Jones are even at the end of camp, I believe Newton will begin the season as the starter. I could be wrong, but my view of this competition is that Jones needs to outplay Newton by a significant margin in order to win the job.

I could certainly see Jones taking over midseason even if Newton is named QB1 to start, but my sense is Bill Belichick would prefer not to put an untested rookie out there in Week 1.

If we were scoring this roster battle like a boxing match, I’d have given Jones the edge in Round 1 and given Round 2 to Newton. The veteran finished Thursday with his best period of camp thus far while Jones faded, completing just two of his final nine passes and looking visibly frustrated after a couple of misfires to an open Jakobi Meyers.

@Fineparker_
Do the Pats have any natural FSs other than d-mac? Seems like they’re loaded with SS/ box safeties. Who steps up into d-mac’s role if he gets injured or leaves next year?
That’s something I’ve been pondering over the last few months. Jason McCourty and Terrence Brooks both played a good amount of deep safety last season, and both left the team this offseason. So, who lines up back there when McCourty leaves the field or shifts into the box, as he did on 273 of his defensive snaps last season, per Pro Football Focus?

The Patriots are fortunate to have a number of versatile, multi-positional defensive backs who can play free safety, even if it’s not their primary position.

Slot corner Jonathan Jones is one. Myles Bryant is another. He played as a deep safety on close to half of his defensive snaps as an undrafted rookie last season (66 of 156, per PFF). Newcomer Jalen Mills rotated between wide corner, slot corner, free safety and strong safety last season, playing more than 180 snaps at each. Kyle Dugger drifts back to deep safety — his primary position in college at Lenior Rhyne — from time to time. Journeyman Adrian Colbert is one option who is primarily a deep safety, but he’ll need to make the roster first.

It is true, though, that the Patriots currently do not have an obvious successor to McCourty, who turns 34 in a few weeks.

@Pekp3k
who is the dark horse making the team?
I’ll be keeping my eye on linebacker Harvey Langi and wide receiver Kristian Wilkerson.

@ofibroso
Who will be team’s captains?
That’s a good question. I think you can safety pencil in Matthew Slater, Devin McCourty, James White, David Andrews and Lawrence Guy. Ja’Whaun Bentley was a captain last year, but I could see Hightower replacing him now that he’s back. Will Newton be one if he’s not the unquestioned starting QB?

If I had to predict one first-time captain, I’d go with Jonathan Jones.

Teams don’t often cut players one year after drafting them in the third round — and trading up to do so, in Keene’s case — but his roster spot is far from secure with Hunter Henry and Jonnu Smith now aboard. Fellow tight ends Matt LaCosse and Troy Fumagalli also have had some positive moments in camp thus far.

@NickFeaston10
Will they stop the offensive juggernaut that is the New York Jets? Led by (Zach Wilson)???????
I’ll still pick the Jets to bring up the rear in the AFC East this season, but I am interested to see how that revamped offense looks down in East Rutherford. The Jets suddenly have a pretty solid receiving corps with Corey Davis, Keelan Cole and electric rookie Elijah Moore (one of my pre-draft favorites) joining Denzel Mims and Jamison Crowder. I’m expecting some serious rookie growing pains from Wilson, though, whose breakout year for BYU came against a cupcake schedule.

@jonothorpejazz
Who is your favourite person to talk to in the locker room and why? Even though it won?t happen this year most likely
The roster has changed a great deal since the last time reporters were allowed in the locker room (after the playoff loss to Tennessee in January 2020), but I’ve always found most of the Patriots’ defensive backs to be helpful and engaging.

Duron Harmon was great to talk to when he was here. Eric Rowe, too. Both McCourty brothers. Stephon Gilmore is a man of few words but has always always been accommodating. Chatting with Adrian Phillips has been a treat, even though we could only do so over Zoom until this week. Ted Karras is a very strong contender in the non-DB division.

Finally getting to interact with players face-to-face and in-person has been one of the real highlights of camp thus far. 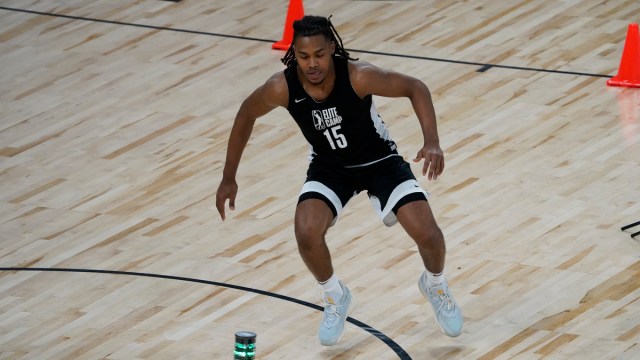