Patriots OTAs Observations: What We Saw On Day 1 Of Spring Practice Skip to content

Here’s everything we observed on Day 1 of OTAs:

ATTENDANCE
OTAs are voluntary for players, and a total of 13 were not spotted at Monday’s session:

It’s unclear which players missed practice due to injury and which ones chose to stay away.

“All the guys that are here are working hard, and I think they’re all improving,” head coach Bill Belichick said before practice. “And those other guys that aren’t here, I’m sure they’re working, too. That’s the way it is.”

Unsurprisingly, Jones was the clear QB1 as he continued preparations for his second Patriots season, and he was sharp Monday, completing 11 of 15 passes in competitive team drills. His lone incompletion in 11-on-11s was a throwaway at the feet of tight end Jonnu Smith.

Hoyer took second reps in each period, followed by Zappe.

(The practice also featured a few rounds of 11-on-11s that appeared to be run at less than full speed. Those were not included in our passing tallies.)

Quarterbacks coach Joe Judge rarely ventured more than a few feet away from Jones, spending most of practice positioned behind the offensive huddle.

Jones capped his day with a lengthy post-practice throwing session before meeting with reporters and then heading off toward the locker room.

Running back James White, who’s recovering from season-ending hip surgery, remained on the main field throughout practice but sat out 7-on-7s and 11-on-11s.

PLAYS OF THE DAY
Defensive back Myles Bryant, sporting J.C. Jackson’s old No. 27, punched the ball out of wide receiver Malcolm Perry’s hands for an aggressive pass breakup in 7-on-7 drills. One play later, the offensive player won in a similar contested situation, with Jakobi Meyers outmuscling cornerback Shaun Wade.

Veteran newcomer DeVante Parker delivered a late highlight when he beat Justin Bethel for a deep-ball touchdown from Hoyer.

Overall, though, standout moments were hard to come by as the Patriots eased their way into their spring practice schedule. Linebacker Ja’Whaun Bentley registered the only other pass breakup when he batted down a Zappe throw at the line.

OTHER OBSERVATIONS
— A prominent storyline as the Patriots began OTAs was their lack of a confirmed offensive play-caller for the upcoming season. One day in, that question remains unresolved.

Judge, offensive line coach Matt Patricia and Belichick all had a hand in running the offense Monday, with Belichick — best known for his defensive prowess — devoting significantly more time to that side of the ball than usual as the team moves forward without longtime coordinator Josh McDaniels.

Belichick wouldn’t offer any hints about the Patriots’ play-calling plan in his pre-practice presser.

“If you’re asking about game plans, we’re months away from that — months,” he said.

— As expected, first-round rookie Strange looks like the clear favorite to fill the Patriots’ left guard vacancy, with Mike Onwenu the leading candidate to replace Shaq Mason at right guard.

Strange was a controversial pick based on pre-draft projections but boasts elite athleticism, a nasty on-field demeanor and a wealth of starting experience, albeit at the FCS level.

With starting left tackle Wynn absent, the Patriots tapped into Trent Brown’s positional versatility. Brown has experience at both tackle spots but played exclusively on the right side last season.

— Should be an entertaining three-way battle for the two starting outside cornerback spots between 2021 holdover Jalen Mills, returning familiar face Malcolm Butler and veteran journeyman Terrance Mitchell. Butler and Mitchell got first ups Monday, with the trio rotating throughout practice.

Mitchell, who started for Cleveland in 2020 and Houston in 2021, applied tight coverage on Parker and Kristian Wilkerson on back-to-back incompletions in 7-on-7s. Butler also stuck close to wideout Kendrick Bourne on a deep incompletion from Zappe.

Rookies Jack Jones and Marcus Jones will be players to watch in the cornerback competition, as well. The former saw plenty of work in team drills, while the latter mostly worked on the side field as he continues to recover from double shoulder surgery.

Top slot cornerback Jonathan Jones was a full participant in his return from a season-ending shoulder injury.

— Linebacker Raekwon McMillan impressed early in training camp last summer before tearing his ACL. Now healthy, he looks poised to compete for a starting job at inside linebacker alongside Ja’Whaun Bentley.

The 26-year-old was a Patriots target ahead of the 2017 NFL Draft before going in the second round to rival Miami. He spent three seasons with the Dolphins and another with the Las Vegas Raiders before joining the Patriots last offseason.

Despite his season-ending injury, New England signed McMillan to a one-year extension last September, signaling they envisioned a role for him in 2022.

— There’s been considerable offseason buzz around McGrone, a 2021 fifth-round draft pick who missed his rookie year with an ACL tear. McGrone was limited Monday but said his knee is fully recovered. He’ll be a player to watch in the coming weeks and months.

Uche and Deatrich Wise were New England’s first-choice edge rushers with Pro Bowler Judon absent, with Wise occasionally standing up and dropping into coverage. That’s a new wrinkle for Wise, who always has played as a hand-in-the-dirt defensive end.

Henry Anderson, who got off to an underwhelming start last season and then tore his pec in Week 4, also rotated in.

— As often is the case, Wise was one of the last players off the field after practice. He spent extra time working with third-year defensive lineman Bill Murray, a practice squadder in 2020 and 2021. They exited shortly after Jones completed his post-practice throws.

— After skipping all voluntary offseason work last year, Smith was present Monday and said he’s been a full participant since the program began in April. He’s looking to bounce back from a highly disappointing debut season in New England, and the extra time on the field with teammates can only help.

Smith caught one pass in competitive team drills, snagging a crosser from Jones early in 7-on-7s.

— Wideout Nelson Agholor felled Bethel with a vicious juke during a 1-on-1 tackler-versus-ball-carrier drill.

We’ll see how the exact hierarchy shakes out before Week 1, but it’s clear Meyers, Parker, Bourne and Agholor are the Patriots’ top four receivers at this point.

— Active day for receiver Tre Nixon, who caught four passes on five targets from Hoyer in team drills. The Patriots’ 2021 seventh-round pick is vying for a roster spot after spending his rookie season on the practice squad.

— Free agent signee Ty Montgomery has played wide receiver and running back in his NFL career and could do both for the Patriots. He exclusively worked with the receivers on Monday, though, and also saw a lot of special teams work.

— Bourne drew cheers from his position mates when he elevated over a pad-holding staffer to haul in a nifty one-handed catch on a goal-line fade. Parker and running back Rhamondre Stevenson also showed sure hands during that unopposed drill.

— The entire first-team offense — plus Judge — ran a penalty lap after back-to-back snap infractions. James Ferentz was in at center at the time, with starter David Andrews sitting out most team periods.

— Jack Jones, Perry and running back J.J. Taylor took punt-return reps. Bill Belichick stopped by during that period to give Jones, a rookie fourth-rounder, some 1-on-1 instruction. The cornerback didn’t do much returning at Arizona State but did see some action in that role early in his college career.

Marcus Jones — a prolific return man at Troy and Houston — should join that mix once he’s healthy enough to do so.

— Perry, a former quarterback at Navy, threw passes to a small group of receivers and tight ends after practice. The Patriots also utilized his versatility on their scout-team offense during one 11-on-11 period.

— Longtime Patriots running backs coach Ivan Fears was in attendance, watching practice from the bleachers. The team has yet to officially announce Fears’ reported retirement, so unclear what role he?ll have this season, if any.

— Continuing a trend from recent years, the Patriots practiced without Flying Elvis stickers on their helmets, and rookies sported temporary jersey numbers. These are assigned by draft slot, not position, creating always-comical sights like a wide receiver wearing No. 51 (Thornton) and a quarterback wearing No. 55 (Zappe).

First-year players won’t be given position-appropriate digits until just before the first preseason game.

The Celtics, who are seeking their first NBA Finals appearance since 2010, trail the Heat 2-1 in the best-of-seven series.

— Practice concluded with several rounds of sprints in the 72-degree Foxboro weather. Conditioning is an important aspect of these spring sessions, especially in New England.

UP NEXT
The next two Patriots OTAs (this Wednesday and Thursday) will be closed to reporters. Their next open practice is scheduled for next Tuesday. All sessions are voluntary until the team’s three-day mandatory minicamp begins June 7. 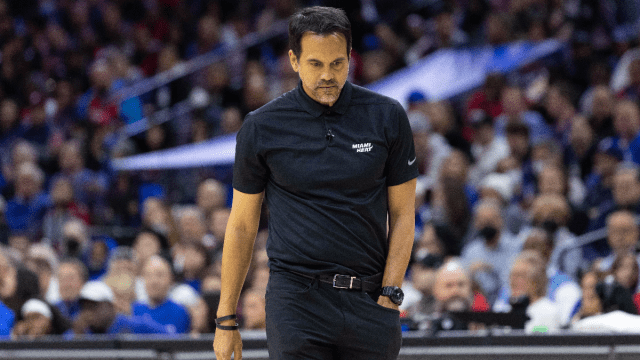 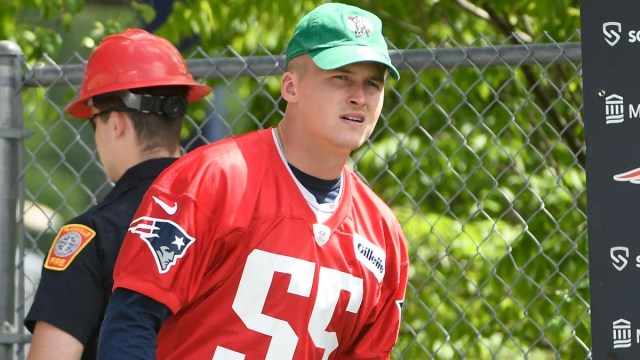