FOXBORO, Mass. — The New England Patriots made their long-awaited return to the practice field Wednesday morning for Day 1 of training camp.

Here’s everything we saw during that roughly 75-minute session:

ATTENDANCE
No unexpected absences. The players who did practice all were placed on the physically unable to perform, non-football injury or non-football illness list before camp:

With the exception of Bailey and Stueber, all of those players were present at practice, running through conditioning drills in workout clothes. Rookie running back Pierre Strong joined them on the rehab field, wearing his helmet and practice jersey.

Rookie cornerback Marcus Jones, who underwent double shoulder surgery before the draft, shed the red non-contact jersey he sported during spring practice and was a full participant.

QB REPORT
Starting quarterback Mac Jones looked sharp in organized team activities and minicamp this spring, and that continued on Day 1 of training camp. Jones completed 18 of 22 passes in competitive team drills, including 8 of 10 in 11-on-11s. His two full-team incompletions were pass breakups by Jalen Mills and Joshuah Bledsoe on back-to-back reps in a red-zone period.

As the unquestioned QB1, Jones took the vast majority of competitive reps. Veteran backup Brian Hoyer was 6-for-10 overall and 4-for-6 in 11s. Third-string rookie Bailey Zappe was 2-for-4 in 7-on-7s and did not take a snap in 11-on-11s.

During drills in which all three participated, the rotation went: Jones, Hoyer, Jones, Zappe.

Hoyer delivered one of the day’s prettiest completions when he found Devin Asiasi in the corner of the end zone (Asiasi, who’s fighting for a roster spot as a reserve tight end, beat starting safety Devin McCourty on the play) but threw the only interception of practice one play later, with Joejuan Williams pulling it down after blanketing Tre Nixon.

PLAYER OF THE DAY
DeVante Parker.

Parker, who’s now wearing N’Keal Harry’s old No. 1, annually ranks near the bottom of the NFL in average separation, has carved out a productive NFL career thanks to his ability to make these types of catches in traffic.

It’s still early, and the defenders were at a disadvantage with no pads on, but this was a promising start for a player who projects as New England’s potential top receiver. With Harry never panning out, the Patriots didn’t have a wideout last season who could consistently haul in contested, physical receptions.

Parker was on the losing end in one contested situation, as he was the target on the aforementioned Mills PBU.

PLAY OF THE DAY
All of Parker’s touchdown grabs elicited cheers from the fans in attendance, especially his one against Jack Jones, which the wideout followed up by turning to the bleachers and waving his arms. But the most impressive reception came courtesy of another Patriots wideout: Nelson Agholor.

On one red-zone rep in 11-on-11s, Agholor skied to high-point a Mac Jones pass over cornerback Malcolm Butler. Agholor, who looked good this spring after an underwhelming first season in New England, also beat Butler for another touchdown after Jones pump-faked and escaped the pocket.

Rookie receiver Tyquan Thornton popped, too, making diving catches on back-to-back plays in 7-on-7s. Both of those catches — including a touchdown against Jack Jones — came from Hoyer, but Thornton also saw considerable action with Jones and the first-team offense. That was an encouraging sign for the slender second-round pick.

We’ll be closely watching how the 6-foot-2, 181-pound Thornton fares once the pads come on, though. He had trouble against Butler’s press coverage on one particularly lopsided rep.

ASSORTED NOTES
— Bill Belichick has yet to confirm who New England’s offensive play-caller this season, but offensive line coach Matt Patricia appeared to be handling those duties Wednesday, speaking over a walkie-talkie before each snap in team drills.

Belichick and quarterbacks coach Joe Judge watched from behind the offensive huddle, with both providing pointers to Jones between rounds of reps.

After practice, Jones said Patricia, Belichick and Judge have been jointly leading the Patriots’ offense and that Belichick has a “clear layout” for how that unit will operate. But aPatricia seems to be the one actually calling the plays, at least at this stage.

— Mills, Bledsoe and safety Adrian Phillips broke up passes, with Bledsoe getting his hand on two near the goal line. Bledsoe was in the mix a lot in this practice, but he faces an uphill climb to a roster spot with McCourty, Phillips, Kyle Dugger, Peppers and special teamer Cody Davis all in his position group.

— Don’t sleep on Ty Montgomery, who made the cut in our final spring roster projection. The veteran wideout/running back saw reps in both roles Wednesday and showed a solid connection with Jones, catching both of his targets during 11-on-11s. One of those was a touchdown against slot corner Shaun Wade that came after Jones scrambled out of the pocket.

— The Patriots’ top offensive line was the same one we saw in minicamp, with Trent Brown at left tackle, Cole Strange at left guard, Mike Onwenu at right guard and Isaiah Wynn at right tackle, with veteran James Ferentz filling in for the injured Andrews at center.

The swap of Brown and Wynn was a major storyline this spring, and it’s proven not to be a temporary experiment. Wynn has never taken a game snap at right tackle in the NFL or college.

Kody Russey, an undrafted free agent to watch, also worked at center with Jones during an early 7-on-7 period. Russey started a whopping 60 games at the position in college at Houston and Louisiana Tech.

— This practice reminded us why it’s not wise to make any grand proclamations based off spring hype.

Two of the Patriots’ biggest minicamp standouts, Nixon and Jack Jones, struggled on Day 1 of training camp. Nixon’s lone target in competitive drills resulted in an interception, and he had to run a lap after a mistake on a punt return. Parker and Thornton both beat Jones for touchdowns.

Both Nixon and Jones also worked with the scout team when the Patriots split their offense and defense, as did Marcus Jones, linebacker Cameron McGrone and running back J.J. Taylor.

You also shouldn’t draw any conclusions after one training camp practice, but the hype following both of those spring studs certainly took a hit Wednesday.

— After Williams picked off the Hoyer pass intended for Nixon, Mac Jones ran down to snatch the ball from the cornerback while the Patriots’ defense celebrated.

— The defense was punished with 10 pushups after Jones hit Damien Harris for a short-yardage touchdown on the final rep of practice.

— During one brief period, Jones served as the holder on what appeared to be the second-team field-goal unit while Hoyer and Zappe threw passes to wideouts. Jones didn’t take any live snaps or hold for any actual kicks, but this seemed to suggest he’s now New England’s backup holder, a job held by Gunner Olszewski in recent years.

This wouldn’t be a new role for Jones. He was Alabama’s holder in college, including during his breakout final season.

— Day 1 of camp featured one position change: The Patriots are trying out Bill Murray, an undrafted defensive tackle who’s spent the last two seasons on the practice squad, as an offensive linemen. Murray swapped his blue No. 97 jersey for a white No. 62 and saw action at guard.

We’ll see if that switch becomes permanent. Murray, who saw significant action on special teams last preseason, has yet to appear in a regular-season game.

— If you attend any practices during the first few weeks of camp, you’ll notice something different about many players’ headgear.

Here’s how those looked in action:

Linebacker Josh Uche compared his cap to a “Q-tip” but said it didn’t hinder him.

UP NEXT
The Patriots are scheduled to be back on the practice field Thursday morning at 9:30 a.m. ET. Like all training camp practices, that session will be free and open to the public. 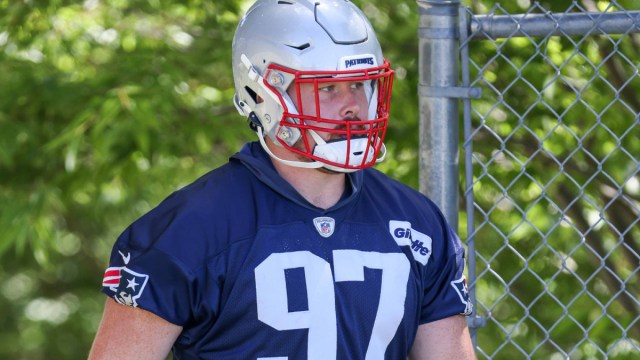 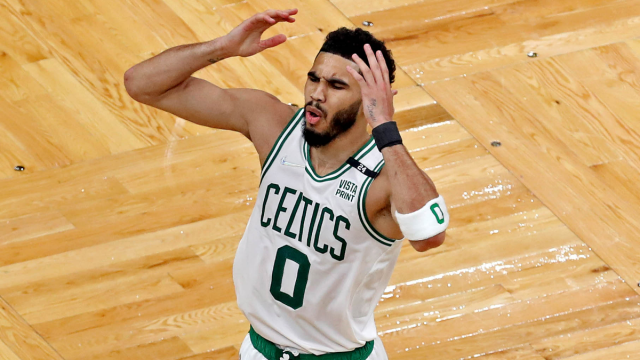