Two of the most electrifying quarterbacks in the NFL will take the field for Week 2’s primetime matchup on “Sunday Night Football.”

Patrick Mahomes and the Kansas City Chiefs will travel to face Lamar Jackson and the Baltimore Ravens on Sunday in a game which feature’s two of the best teams in the AFC.

Here is our betting preview for the second “Sunday Night Football” contest of the NFL season. The line, point total and all props are provided by DraftKings Sportsbook.

BETTING TRENDS
The Chiefs rallied back for a Week 1 win over quarterback Baker Mayfield and the Browns, benefitting from a special teams miscue by Cleveland en route to the 33-29 win. Kansas City did, however, come up short against the 5.5-point spread, but was able to cash in on the over by a touchdown.

The Ravens, on the other hand, were dealt a hard-to-swallow setback against the Las Vegas Raiders in Week 1. Baltimore, who has already been hindered by injuries at the running back position, entered the contest as four-point favorites before Raiders quarterback Derek Carr caught fire and led a 33-27 overtime win. Baltimore did, however, cash in on the over during their first week meaning both teams are 1-0 against the total this season.

PICK: Kansas City -1 after first quarter
The Chiefs are on the road, yes, but it wouldn’t be a shock to see them reap the benefits of going up against a Ravens secondary which struggled to slow down the Raiders last week. Baltimore still has talented cornerback Marlon Humphrey and a cast of characters on defense, but the season-ending injury to Marcus Peters certainty seemed to impact the Ravens in their opener. Chiefs coach Andy Reid and Mahomes could exploit that early before Baltimore is able to make any adjustments.

And would it really surprise anyone if Mahomes threw a pair of touchdowns and propelled Kansas City to a 14-3 or 14-7 lead after the first quarter? It feels like Kansas City’s group of offensive weapons — Travis Kelce, Tyreek Hill, etc. — could very easy bring that to fruition. And at +105 (a $100 bet wins you $105), it is more than enticing. 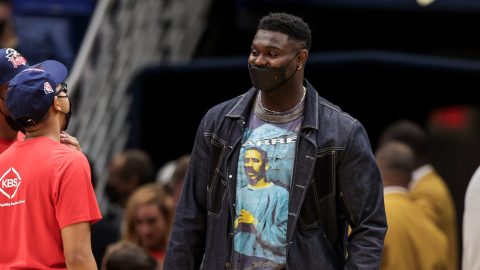 The Pelicans announce that Zion Williamson will return to practice