You might not have heard, but the Presidents Cup is this weekend, with the PGA Tour’s response to (or copy of) the Ryder Cup set to tee off in North Carolina.

Team USA will take on the International Team at Quail Hollow in Charlotte in the biennial team competition. The Presidents Cup doesn’t hold a candle to the Ryder Cup, but you almost have to feel bad for how this tournament has taken a hit. COVID-19 pushed it back into 2022 after a highhly entertaining competition in 2019 at Royal Melbourne. Then, making matters worse, the rash of PGA Tour defections to the LIV Golf Series hit both teams but impacting the International club especially hard with world No. 2 Cameron Smith — expected to be the team’s top player — jumping ship a month before the Presidents Cup.

As such, the Americans are heavy favorites. Team USA has won eight straight and has lost just once in 13 tournaments. The lone loss came at Royal Melbourne in 1998 and the two sides tied in 2003, too. Other than that, it’s been the Americans running away with it, especially on home soil.

The Americans were in the neighborhood of -300 favorites as recently as August, but the LIV defections paired with heavy money coming in on the Americans moved the line considerably.

Here are the current “winner” odds at DraftKings Sportsbook.

To put that -700 in some sort of perspective, we took a look at some of the moneyline odds for this weekend’s college football games. Here are some of the games with their point spreads.

It’s an imperfect exercise, sure, but Team USA is about a two-touchdown favorite. If the Trevor Immelman’s International Team were to capture the cup, it would be one of the biggest upsets in golf history.

The tees go in the ground Thursday afternoon at Quail Hollow. Here are the foursomes matchup for the first day.

The value in betting on the US to win outright is obviously long gone at -700, and an International outright bet probably isn’t worth it at just 7-1 given the history and disparity of talent. But there are a few ways to bet the Presidents Cup, and these are some of the bets we’re circling (odds from DraftKings Sportsbook).

Thursday foursome: Thomas/Spieth (-125) over Conners/Im
Conners and Im are two of the top 26 players in the world, which certainly is nice. But not only are Thomas and Spieth objectively better, the American duo also has a ton of experience playing together. Spieth especially has been nails at the Presidents Cup, going 5-0-0 in foursomes, while Thomas is 2-0-2. Conners and Im certainly have the talent to win this match, but the juice on the Americans isn’t enough to scare us away.

Top point scorer: Cameron Young (+1800)
The Americans get to set up the course, and we all know it’s going to play super-long. That benefits someone like Young, who is one of the longest hitters on Tour. He’s not especially accurate, but it sounds like Team USA has countered against that, too, with the rough not grown up very high. So, he basically can bomb it out there even if he’s spraying it and still be in every hole. He gets a go on Day 1, too, giving him a chance to grab an early point, build some momentum and make his case for a weekend full of tee times. For similar reasons, we’ve also got our eye on Tony Finau at 12-1.

Top USA rookie point scorer: Max Homa (+400)
If you want a slightly bigger payout, you can get Homa as the tournament’s top debutant at +500. We’ll take the slightly lower number here to eliminate a handful of players and lean in on Homa, who comes in playing some excellent golf. Homa just won the Fortinet Championship last week on the strength of a fifth-place finish at the Tour Championship that earned him a cool $2.75 million. He has some course history, too, winning the 2019 Wells Fargo at Quail Hollow. He’ll get out there Thursday so he gets the early chance to get some points, and a reunion with former college teammate Collin Morikawa at some point this weekend could really help. He’s also someone who is very much leaning into the opportunity to represent his country. 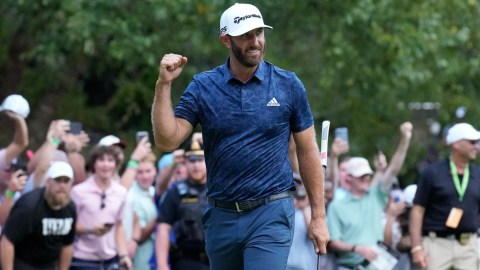