SOUTH BEND, Ind. — Notre Dame said Monday that football staff responsible for advising whether it was safe to practice outside used out-of-date weather information the day a student videographer fell to his death when the hydraulic lift he was on toppled over in high winds.

Declan Sullivan, a junior film student from Long Grove, Ill., was killed when the 40-foot lift fell over in a 53 mph wind gust on Oct. 27.

The investigation found that staff members likely depended on readings from the National Weather Service provided at 1:54 p.m. that day showing 23 mph winds in the area with 29 mph gusts. Although practice didn't start until 3:45 p.m., the staff was unaware that at 2:54 p.m. the weather service reported winds of 29 mph with 38 mph gusts.

At the time of the accident at 4:54 p.m. the weather service was reporting 33 mph winds with 51 mph gusts.

John Affleck-Graves, the university executive vice president, was asked during a news conference why no one involved used common sense and ordered the lifts lowered because of the winds.

"The report highlights that as the primary weakness in our procedures," Affleck-Graves said. "The lack of wind-measuring equipment on the field during the practice and the absence of any single individual with responsibility for monitoring the wind."

The school released the details in a report summarizing its own investigation into the accident. Peter Likins, an engineer and former University of Arizona president who provided an independent review of the investigation, wrote that no one person was to blame for the accident.

"Though a needless loss of life cries out for one to shoulder blame, the facts here do not support any single individual finding of fault," he wrote.

The Rev. John Jenkins, the university president, said he was ultimately responsible and that no one has been disciplined or punished for the accident.

"We did not find any individual who disregarded safety or was indifferent to safety. Consequently, there was not any individual discipline," Jenkins said. "Our conclusion is that it's a collective responsibility that must be deal with collectively as we move forward."

Football coach Brian Kelly said the death of Sullivan has affected him.

"You're never quite the same. But I think it has been articulated, I think we're all collectively focused on making sure something like this never happens again," he said.

"Ultimately, no one — not Collins, Klunder, nor Russ — told Kelly or any coach that practice should be held indoors or that the lifts should not be used," the report says.

Although Notre Dame staff members weren't aware that the weather service was reporting higher wind speeds, Sullivan was. The report said Sullivan checked the weather before practice at weather.gov and saw a warning indicating the possibility of gusts up to 60 mph. Klunder, Collins and Russ did not recall seeing the wind warning.

The report did say that while Collins was concerned about the wind, "he did not believe that the winds were strong enough to warrant grounding the lifts."

There was no immediate response from Sullivan's family, who have said they hope others will learn from Sullivan's death and take appropriate safety steps. The school has replaced the lifts with remote-controlled cameras.

The report was released two days after spring football practiced wrapped up and about a month after the Indiana Occupational Health and Safety Administration fined Notre Dame $77,500 for six safety violations tied to Sullivan's death, including knowingly putting its employees in an unsafe situation and failing to heed weather service warnings.

Notre Dame said its investigation found "the accident was caused by a confluence of unrelated events and issues" — among them a failure to provide football staff a way of monitoring wind speed during practices. Affleck-Graves also noted that the school's office of risk management didn't know the football team used the lifts to film practice.

Other factors cited as causes of the collapse were the lift being fully extended 40 feet and an unusual burst of wind described as "highly irregular," occurring in South Bend approximately once every three years in non-thunderstorm conditions. The report also said some of the violations cited by state regulators played no role in Sullivan's death, including the fact that the lift hadn't been inspected in more than a year.

Notre Dame has told IOSHA it wants a formal hearing to discuss the state's findings.

The school said it found there was an unwritten policy of lowering the lifts when winds exceeded 35 mph. The other two lifts being used that day were not supposed to be used in winds of more than 28 mph, and those were less susceptible to tipping than the one Sullivan was on.

But it also said that an engineering analysis found that "wind speeds significantly higher than 35 mph were necessary to tip the lift."

The IOSHA report quoted Sullivan as telling assistant video coordinator Reuel Joaquin "Aw, man, this sucks," when he was told the practice would be outdoors that day. He also tweeted that the weather was "terrifying" and also wrote: "Gusts of wind up to 60 mph today will be fun at work … I guess I've lived long enough."

University investigators, however, couldn't determine whether Sullivan "felt unsafe and pressure to stay in the lift," specifically questioning his use of the word "terrifying."

"Student videographers indicated their belief that the tweets likely reflected his joking nature, adding that his use of that word was common," the report said.

Jenkins said it is impossible to know whether Sullivan was worried about his safety when he sent the tweets.

The president also said the university is heeding the words of Sullivan's parents, Barry and Alison, and IOSHA and will work to improve safety on campus and to educate others to help ensure such an accident doesn't happen again, including coming up with a protocol to ensure practices are held in a safe environment. He also said Notre Dame will work with IOSHA to develop a national safety education program.

Report: Chauncey Billups Likely Out for Game 2 Against Celtics With Knee Injury 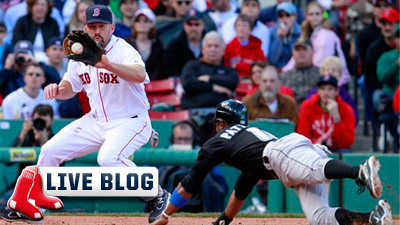