USC coach Lane Kiffin was not happy at the end of regulation in the Trojans’ game against Stanford at the Los Angeles Coliseum on Saturday.

In the closing seconds, USC did a poor job of clock management. Sophomore wide receiver Robert Woods made a reception but didn’t fall to the ground, which would have given the Trojans time to call a timeout and attempt a winning field goal. Instead, Woods ran across the field toward the sideline, and time expired with the score tied at 34.

Kiffin’s reaction to Woods’ play was to get upset with the referees for not granting the Trojans a timeout, but if anyone was at fault, it was Kiffin. The coach has ample opportunity to teach his players what to do in that (or any possible) situation, and Woods’ mistake shone a light on a potential oversight by Kiffin.

In the cartoon above, cartoonist Will O’Toole addresses the typical reaction by a coach whenever a young player makes a mistake. 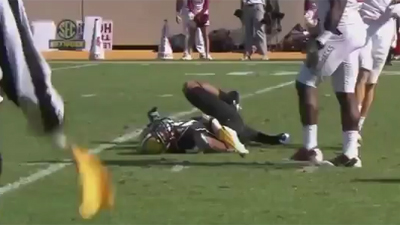 Who Is Patriots’ Most Valuable Running Back, When Healthy?