Listen up, Bostonians. Andrew Ference is willing to buy you a beer.

All you have to do is join him in the Czech Republic, which is where the Bruins' defenseman will be playing during the NHL lockout.

Ference announced on Twitter Wednesday that he'll be heading overseas on Oct. 7 — barring a new CBA. He'll be joining Ceske Budejovice of the Czech Extraliga, which is the same team he played for during the last NHL lockout.

Going back to my old team,Ceske Budejovice,on Oct 7 barring any CBA.I'll buy any Bostonian a Budvar if I see you there. twitter.com/Ferknuckle/sta?

Ference sees playing overseas as an opportunity to stay sharp, an approach that many players, including a few of Ference's teammates, are taking during the work stoppage.

"When I look back at last time, I feel like the guys who didn't play and
didn't keep sharp definitely lost a step," Ference told the Boston Herald on Monday. "I think
everybody's still eyeballing this thing as optimistically as possible
and still preparing to play and hopefully the sooner the better. But if
it starts stretching out, you can practice for only so long. You want to
get into some games and play and stay competitive and keep working on
your game. It's hard to do when you're just scrimmaging and practicing."

Now, which Bostonian is going to see if Ference is serious about buying a Budvar? 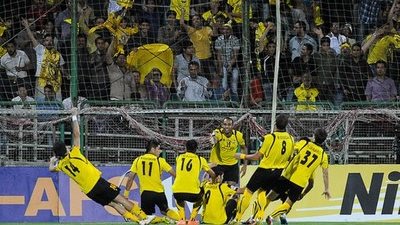