Lionel Messi has a reputation for resisting the urge to dive or fake  injuries, which is why the world is holding its collective breath.

The FC Barcelona superstar was carted off the field Wednesday after suffering a suspected knee injury. It comes as a major blow, as the Argentine forward is in hot pursuit of one of soccer’s most “untouchable” records.

Messi suffered the injury in the 85th minute of Barcelona’s UEFA Champions League game against Benfica.

The 25-year-old attempted to dribble the ball around Artur Moraes in a late-game scoring effort, but made contact with the lunging Benfica goalkeeper.

His knee bent to an awkward angle, but he maintained his balance, turned and took an uncontested shot at the goal (Moraes recovered in time to make the save). He fell to the ground immediately after, staying there for a few minutes and clutching the back of his left knee at times. He was put on a cart and driven from the field at Barcelona’s  Camp Nou Stadium.

The extent of his injury is unknown at this point.

Messi is chasing Gerd Muller‘s record for most goals scored in a calendar year. The German great scored 85 times for club and country in 1972. Messi is second all-time with 84 in 2012.

He scored his 76th goal on Nov. 11, which bettered the mark Pele hit in 1958. He was chugging along until Wednesday’s events.

Messi only entered the game in the 58th minute. Before the game, manager Tito Vilanova was criticized for using Messi in a relatively meaningless game, as Barcelona had already qualified for the knockout rounds of the Champions League as Group G winners. The game ended in a scoreless draw.

Messi will certainly undergo scans on the injured knee in the coming days. Barcelona has four games remaining in 2012.

Watch Messi get injured and carted off the field in the video below. 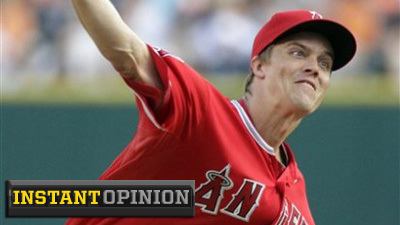