When Robert Griffin III wrenched his knee on the chewed-up FedEx Field turf on Sunday night, it was a fluke. He has charged into much worse situations before, and the leg-twisting that happened as he looked for a fumbled snap was one of those unfortunate accidents that come from a bad mix of a mistake and a quick reaction.

But, while the play that finally knocked Griffin out of the Redskins-Seahawks wild card game was a fluke, that Griffin had to leave the game was not an accident — it was a matter of time.

Griffin came into the game banged up, and he aggravated his already-touchy knee in the first half while scrambling. With the Seattle defense bearing down constantly and Griffin trying to make plays with his legs, an injury was going to happen. It just ended up happening on a botched play.

Critics have been calling out Redskins coach Mike Shanahan for keeping Griffin in the game, although Griffin was emphatic afterward that he was not going to be taken out, even if he was hurt. The coach certainly has a responsibility in this situation, and he’s correct to be criticized. But the main point here should not be what Shanahan did.

The real issue is what kind of career Griffin wants to have.

Ultimately, Griffin is the one who will decide whether he will become a truly great running quarterback, or whether his determination to take hits and play through injuries will limit him as a player and hurt his team. Whatever his coaches decide, he is the one taking the shots with his injuries and his career, and those decisions are what people should be focusing on now.

Griffin has plenty of examples to look at as he decides how to chart his path. In Pittsburgh, Ben Roethlisberger was unavailable this year when his team needed him most after missing several games due to hard hits. In Philadelphia, Michael Vick is no longer a freewheeling playmaker, but rather a battered soul. Conversely, in Green Bay, Aaron Rodgers is as tough as ever but not missing pivotal plays and games. In New England, while not fleet-footed, Tom Brady is going to wisely slide every time so he doesn’t miss a snap.

The problem here is that the question of helping the team, which Griffin cited in his decision to keep playing, has been incorrectly framed. When Griffin and others talk of staying on the field with injuries, they present it as a question of whether to play, and help the team, or not play, and be selfish. But really, as the best quarterbacks in the league have shown, the best way a player can help his team is by being available to play every game.

Griffin should think long and hard about insisting on going back into games when injured — or circumventing his coaches or medical staff — but where he really needs to do the work is on the field. The play on which Griffin was injured in the first half was not one where he needed to be taking a hit, and it was preceded by several other scrambles where Griffin put his shoulder down and dove for a yard inbounds rather than scampering out of bounds a hash mark earlier.

Fighting for an extra yard as a running quarterback is not heroic. It’s stupid. It’s betting the house to win the lottery when you could just as easily hold some money and turn it into a smaller jackpot.

Griffin needs to do some thinking in the offseason about what he wants to accomplish in his career, and what odds he needs to play to get there. If he wants to get every yard every time, he can keep playing the way he has. But if he wants to remain in games, play a full season or even have a long career, he needs to start studying ways that he can produce while protecting his body. He should spend just as much time figuring out how he can run for eight yards without getting hurt (rather than 10 yards with a knee twist that could linger for six games) as he does scouting opposing teams’ defenses.

Griffin doesn’t have to give up his game, and everything that makes him a unique and great player, to be safer — and available for his team. The Eagles again pose a fine example. While Vick has been a test case for how an immensely talented quarterback gets slammed into oblivion and loses the ability to make good use of his legs, Donovan McNabb was also once known for being able to run around defenses, yet he didn’t lose the same amount of significant time to injuries. If what is most important for the team is having its quarterback available, the game must be adjusted, no matter how many running yards are enticingly available.

A new approach to how he attacks the game, and when he chooses to stay in games once he gets hurt, is what will determine if Griffin is going to be the Redskins’ leader for some time.

Griffin is a great player and a great leader, and he shouldn’t be faulted for wanting to do the right thing and play hard. But the bravado this Sunday that accompanied what could be a more harmful injury should be a rookie mistake.

In the future, Griffin needs to remember that, just as rushing yards are only good if they help his team win, running with abandon is only good if he’s healthy enough to take the field for his team for many years to come. 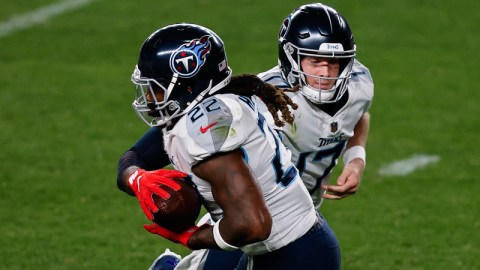